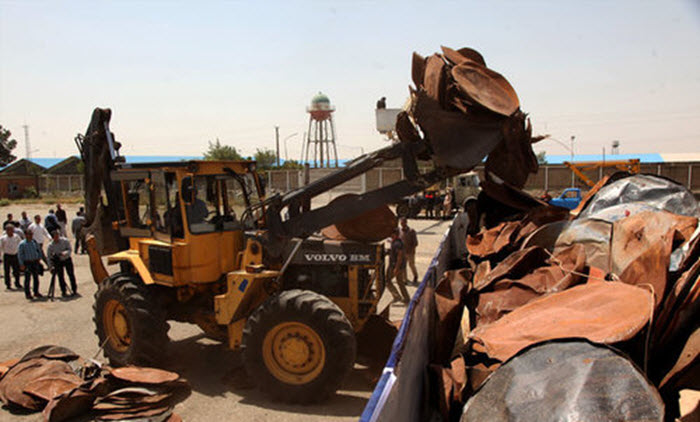 London, 25 Jul – The authorities in Iran destroyed 100,000 satellite dishes and receivers as part of a crackdown against the banned devices.

Naghdi warned of the terrible impact that satellite television has on society’s morals.

He said: “The truth is that most satellite channels… deviate the society’s morality and culture. What these televisions really achieve is increased divorce, addiction and insecurity in society.”

Not to mention the fact that state control of media is of extreme importance to a dictatorship; if Iranian’s can see the society outside of their country, it could encourage rebellion, protests, and strikes.

If they see the Iranian Resistance on worldwide news channels or a sitcom where women are not treated as second class citizens or a drama where the LGBT+ community are not punished by the government, it could really weaken the regime’s position.

The regime has banned satellite dishes and those who sell, use or repair any equipment face a fine of up to $2,800 (€2,500). Neighbourhoods are often raided by police with the offending dishes being confiscated.

Despite this most Iranians continue to watch satellite channels.

Culture Minister Ali Jannati said: “Reforming this law is very necessary as using satellite is strictly prohibited, but most people use it.”

Despite regular crackdowns, Jannati estimated that around 70% of Iranians violate this particular law.

Naghdi said: “Most of these satellite channels not only weaken the foundation of families but also cause disruptions in children’s education and children who are under the influence of satellite have improper behaviour.”

The regime has tried other methods to stop the spread of satellite television stations by jamming signals but there are ways around their blockade.

He urged the regime to launch pro-regime satellite channels to combat those manned by the resistance movement in exile.

In Iran, these topics are banned from media coverage:

It is estimated that 40% of Iranian families have access to it, in part because of the regime’s crackdown on internet freedom (blocking around five million websites, tracking down and arresting online activists). Their viewing habits cannot be tracked in the same way that their internet usage can.

Gholamreza Khosravi, an activist of the People’s Mojahedin Organization of Iran, PMOI (Mujahedin-e-Khalq, MEK), collected information and provided financial assistance to the Simaye Azadi station. He was executed for this in June 2014.

S.Korea to suspend Iranian bank as part of sanctions

AFP: South Korea will suspend the operations of an...