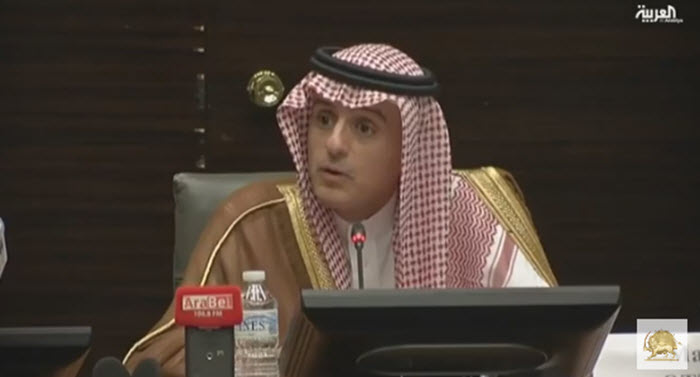 London, 25 Jul – Saudi Arabia’s Foreign Minister Adel Al-Jubeir made a speech highlighting Iran’s sponsorship of terrorist organisations at an event about terrorism held by the Belgian Ministry of Foreign Affairs in Brussels on 21 July.

Al-Jubeir’s statement, broadcast on Al-Arabiya, was made in response to comments from the Iranian Consul General that Saudi Arabia had sent terrorists to Iran and stated: “Iran did not say anything that is based in fact”.

The Saudi politician went on to explain how the Iranian regime has provided financial assistance for Hezbollah, helped attack embassies in Iran in violation of international law and bombed civilians.

He said: “Iranian agents have been linked to terrorist attacks in Europe and South America.”

He explained that Iran was responsible for the 1996 Khobar Towers attack against American marines and has been sheltering the leaders of the plot ever since. Their proof is that one of the men was caught in Lebanon last year, using an Iranian passport, despite being a Saudi citizen.

He said: “Ronald Reagan used to say that facts are stubborn things. You can’t get around the fact that Hezbollah is a terrorist organisation. Attacking embassies is very clear – they don’t just blow themselves up. Somebody does it. Diplomats don’t commit suicide by shooting themselves three times. Somebody is responsible.”
He hoped that Iran could give up their expansionist policy and abide by international law; that Iran would stop sending agents to commit terrorist attacks in Saudi Arabia, stop smuggling weapons to the Houthis in Yemen and stop smuggling explosives into Saudi Arabia, Bahrain, and Kuwait.

He said: “So, could it be that the whole world is wrong and Iran is right? Could it be that international law which says peaceful relations and non-interference in the affairs of others is wrong and Iran’s approach of aggressively pursuing your objective irrespective of how you do it is correct? I don’t think so.”
Iran is designated a supporter of terrorism by the international community and if they want that to stop, Iran must abide by international laws, stop its interference in the affairs of other nations, and improve its human rights record.

Iran in talks to sell oil to Egypt: agency

Reuters: Iran is in talks to sell crude oil...