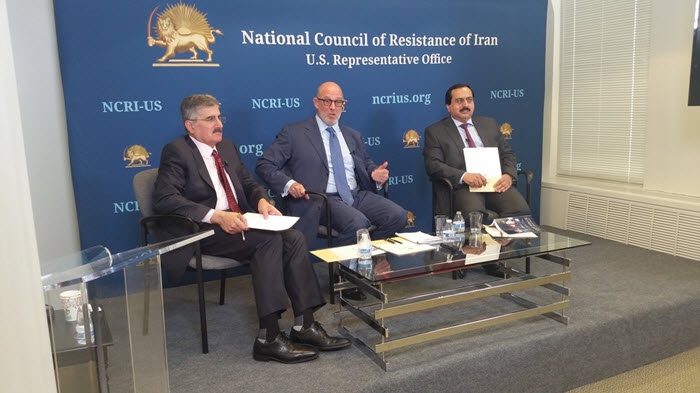 The discussion was held at the NCRI’s Washington Office, and was moderated by the Council’s Foreign Affairs Committee member Ali Safavi, who said “the startling picture, showing the heartbreaking silence of the five-year-old Syrian child, Omran Daqneesh, covered in dust from head to toe after being pulled from the rubble following an airstrike, mirrors the stunning silence of the West regarding the Syrian tragedy.”

Ambassador Ereli talked about the importance of the book, How Iran Fuels Syria War, “not only because what it tells us about what’s going on in Syria, but because what it tells us more broadly about how the Iranian regime operates; it’s a taxonomy of influence.” He said that by spending a lot of money, Iran is “not just controlling territory on the ground, but it’s buying loyalty.  And the people who they’re supporting and their children and their children’s children are going to be Iranian advocates for many generations to come.” He added, “Syria is just the latest example to… create client states.”

“Iranian involvement in Syria reflects its continued expansionist and hegemonic ambitions that start in the region and go beyond. If anything, the regime has grown more aggressive in the aftermath of this nuclear deal, not less,” Mr. Hass said, offering his perspective in regards to the Tehran regime, and he added, ”This shows the fallacy of two basic U.S. positions of recent years.  The first, the hope that a nuclear agreement with Iran would moderate that regime.  And that is a hope that drove U.S. policy toward Iran right from the start, going back to the reluctance to comment on the fraudulent election in 2009, reluctance to get behind the opposition… Second, Syria shows the fallacy of the U.S. belief that a reduced U.S. role in the region and beyond would lead to a safer world.”

Tehran has been playing a critical role in keeping Bashar al-Assad in power, according to Jafarzadeh, who disclosed that the Syrian dictator had intended to leave the country after the setbacks he suffered in September 2015.  The Supreme Leader Ali Khamenei, dissuaded Assad at the last minute, as he arrived at the Glass Building located in Damascus Airport to depart the country.

That Tehran has divided Syria into five military zones, was revealed by the NCRI Deputy Director, who says Iran has established 18 military command centers across the country by the Islamic Revolutionary Guards Corps’ (IRGC) Qods Force.

Jafarzadeh alleges that Iran’s military presence has increased to 70,000 IRGC, regular army forces, Iraqi, Afghan and Pakistani mercenaries as well as the Lebanese Hezbollah.  He declared,  “The fall of Assad would pave the way for the fall of the clerics ruling Iran; this explains Tehran’s huge financial and human resources spending in Syria.” He stressed that the international community must “end the Iranian regime’s occupation of Syria, exclude Tehran from international talks on Syria, not partner with the regime to fight ISIS, provide political and financial backing to Syria’s moderate opposition and establish a no-fly zone to protect the civilians.”

The Guardian: Iran is expected to resume testing machinery...