Maryam Rajavi: The beginning of the Iranian Resistance’s march towards freedom and democracy, heralding a new era of change. 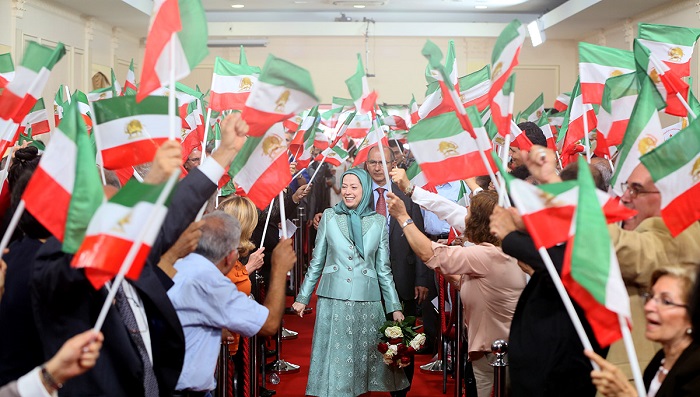 London, 10 Sep – Auvers-sur-Oise on Saturday, September 10, 2016, in a ceremony in the presence of French, European and Arab dignitaries.

Large crowds of Iranians celebrated the successful conclusion of Camp Liberty residents’ relocation from Iraq to Europe at the office of the National Council of Resistance of Iran.

The Iranian Resistance’s President-elect Maryam Rajavi described the relocation as a strategic setback for the clerical regime, adding that the bells toll and call for change and for an era of progress and advancement.

Maryam Rajavi added: In these 14 years, thanks to the endurance of the PMOI and its members in Ashraf and Camp Liberty, and relentless political and international campaigns, the clerical regime’s schemes to destroy and annihilate the Iranian Resistance were thwarted. The Iranian people’s movement for freedom thus took a substantial step forward against the clerical regime. The regime’s plan to guarantee its own survival with the physical elimination of the PMOI/MEK was foiled.

A number of political dignitaries, old friends of the Iranian Resistance, and staunch defendants of Ashraf attended the ceremony. They included Sid Ahmad Ghozali, former Prime Minister of Algeria; Alejo Vidal Quadras, President of the President of the International Committee in Search of Justice and former Vice President of the European Parliament; Ms. Ingrid Betancourt, former presidential candidate for Columbia; Madam Annisa Boumediene, Expert on Islam and former First Lady of Algeria; Tahar Boumedra, former Chief of the Human Rights Office of the UN Assistance Mission to Iraq, and in charge of the Case in Ashraf; Bishop Jacque Gaillot and a number of French elected representatives including Mr. Dominique Lefebvre, Jean-Pierre Muller, Pierre Bercis, head of the New Human Rights Foundation, and Sheikh Miskin.

They congratulated Mrs. Rajavi and the Iranian Resistance, and described the 14-year endurance of the PMOI in Ashraf and Liberty as an historical example.

In another part of her remarks, Mrs. Rajavi said: The regime ostensibly wanted to expel the Mojahedin from Iraq and to send them away from the Iranian border. Still, the mullahs’ real demand was their annihilation or their surrender to the mullahs’ rule. The fake arrest warrants issued by the Iraqi judiciary, the extradition schemes and the red notices passed on to Interpol, sought to pave the way for the same purpose.

The PMOI, however, endured in the face of a ruthless siege; it kept alight the flames of struggle for freedom and held high the flag of the movement for the overthrow of the Velayat-e Faqih regime. It preserved the Iranian nation’s moral, activist and strategic asset amidst the most horrifying crises in the Middle East.

Maryam Rajavi admired the powerful chain of solidarity and support for the residents of Ashraf and Camp Liberty in all five continents and added: It was the great power of conscience that rushed to the aid of the resistance from all around the world and prevent much worse disasters.

Referring to the movement to obtain justice for the victims of the 1988 massacre in Iran, the Iranian Resistance’s President-elect asserted: A new chapter has now opened, which is marked by the full-fledged advancement for the overthrow of the Velayat-e Faqih.

She added: It is not without reason that just yesterday, mullah Ahmad Jannati, head of the Assembly of Experts and the regime’s Council of Guardians, set all considerations aside and said, “If the PMOI had been given more opportunity and if they had not been massacred, they would have uprooted the regime.” So, at issue was not Islam or the Quran but preservation of the regime and its power by any means. But let me make it clear for Khamenei and his regime: The Iranian Resistance is now prepared a hundred times stronger and more experienced to forge ahead in its struggle.

AP: The head of a small secular political party...