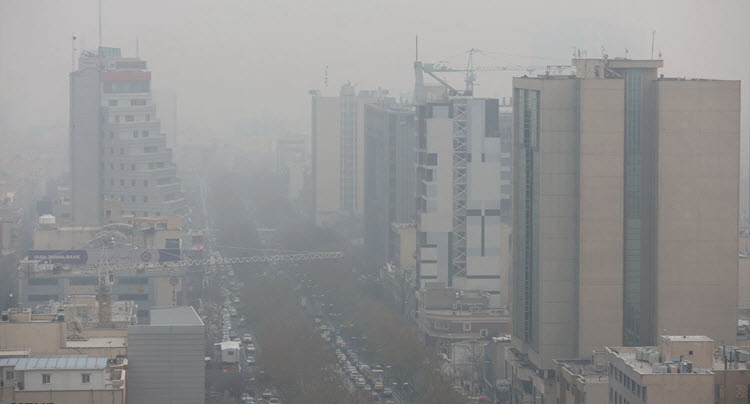 London, 16 Nov – In an article in Phys Org on November 14, described a blanket of brown-white smog which descended over Tehran on Sunday. It was so heavy, it blocked views of the mountains, and forced many residents to retreat indoors, or else wear face masks outside.

An Air Quality Index of 156, well over the 150 considered “unhealthy” for the general public, was measured in Tehran, and even worse, in Isfahan, a tourist hotspot, the level hit 167.

“We hope our people’s hospitality wipes the grey image of Tehran’s beautiful attractions from their minds,” the capital’s tourism official, Rajab Ali Khosroabadi, told the ISNA news agency, in an attempt to apologize to foreign visitors.

Officials ordered kindergartens and primary schools in Tehran to stay closed on Monday and Tuesday, and restrictions on traffic were tightened. Ambulances waited in the busiest areas, as warnings were issued that children, the elderly, and those with existing health conditions were at particular risk.

“Since no one does anything, every year the problem gets worse. The government should block old cars. We must improve public transport,” a first-year sociology student, Zeynab Nazari, told AFP.

Every year, cool autumn temperatures cause an effect known as “temperature inversion”, a phenomenon that is caused by a layer of warm air above the city that traps pollution from some 10 million cars and motorbikes. An official told state television that the smog is expected to hang over the city until Wednesday, when forecasters expect winds to move the stagnant air.

What Is Next for Iran?