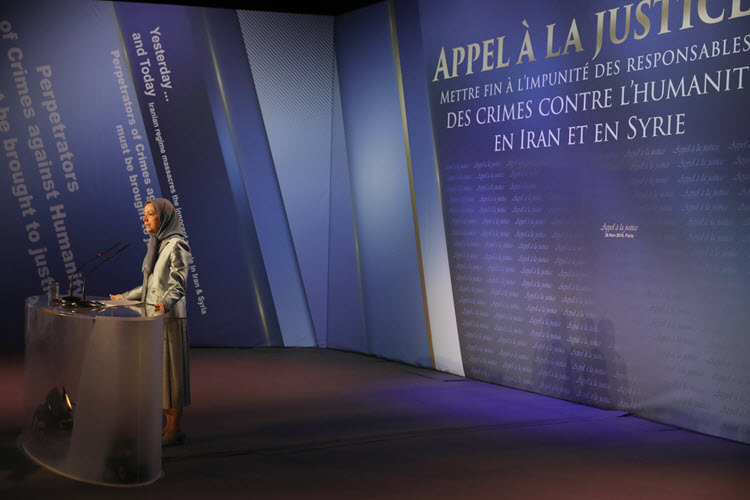 London, 3 Dec – Iranian opposition leader Maryam Rajavi stated that the appeasement policy with Iran must end as it only allows the elites to prosper at the expense of the public.

Rajavi made that point at a conference in Paris on November 26. The conference, named “Call for Justice: Ending Impunity for Perpetrators of Crimes Against Humanity in Iran and Syria,” attracted politicians and lawmakers from Europe and the middle east.

The Iranian people and the National Council of Resistance of Iran (NCRI), expect Donald Trump’s White House to reverse the disastrous appeasement policy.

In the past three years, since the “moderate” Hassan Rouhani took office, there have been over 3000 executions, numerous cases of meddling in the affairs of other sovereign nations and slaughtering the democratic opposition forces in other countries (i.e. Syria).

The idea that engaging with the mullahs is necessary in order to fight ISIS is false, the mullahs are merely using the spread of ISIS to punish innocent Sunni Muslims and are not fighting ISIS at all.

Heshmat Alavi, a human rights activist, wrote in an op-ed of the American Thinker: “It is high time to bring an end to the unjustified concessions provided to Tehran in light of the atrocious human rights violations inside the country and further meddling across the region.”

The Iranian Regime slaughtered 30,000 political prisoners during the summer of 1988 and they continue to do so to this day. They then imprison the man who provides proof of their crimes.

It must be heard loud and clear throughout the world that you cannot imprison political opponents, and Donald Trump as the incoming US President must lead this charge.

US calls for release of Americans imprisoned in Iran

AFP: US Secretary of State John Kerry on Wednesday...