I Have Always Stood in Awe of Iran’s History 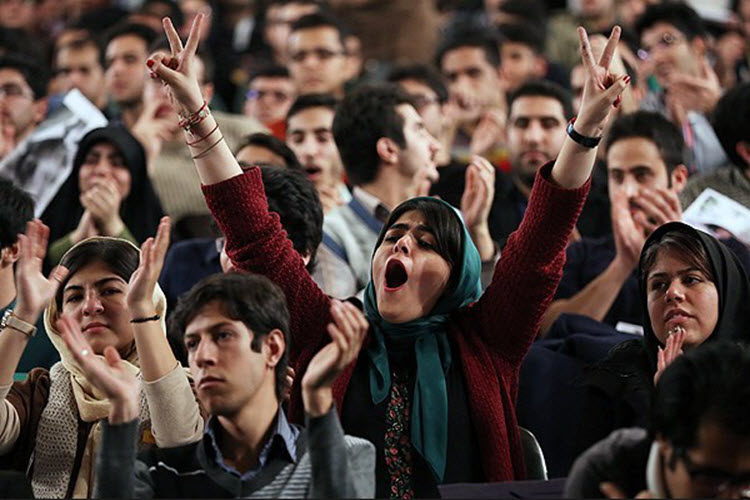 This article by Hamid Yazdan Panah a young Iranian-American human rights activist and attorney, published by GlobalVoices, is a moving and sincere recount of the recent protests of the fearless university students in Iran.

Last week, at Tehran’s Amir Kabir University, a defiant student gave a fiery speech focused on what he referred to as the historical responsibility of young Iranians. This included not only a sharp critique of the ruling establishment’s injustices, but also a scathing indictment of Iran’s murderous policy in Syria and demands that those inside the country have the courage to speak out and stand for what is right. (See full video with English subtitles).

The images and speeches that emerged from Iran last week left me truly proud to be an Iranian and in awe of the bravery, passion and sacrifices being made by those inside the country. They also gave me hope, in spite of the lack of meaningful reform inside Iran, and the absolutely dismal situation in the region and throughout the world.

In his speech, Amir Kabir university student declared that it is “our duty and right to find out about these things. We must ask what took place in 1988.” The 1988 massacre of political prisoners has long been one of the key taboo subjects in Iran, and recently emerged as a public issue after the leaking of an audio tape in which the late Ayatollah Ali Montazeri is heard discussing the mass killings of prisoners with no due process. In the recording Montazeri, the Deputy Supreme Leader at the time of the massacre, is heard saying that “in my view, the biggest crime in the Islamic Republic, for which history will condemn us, has been committed at your hands, and they’ll write your names as criminals in history.”

The Amir Kabir student referenced Montazeri’s quote in his speech, affirming that “history will condemn us—if we don’t look into these issues.” He went on to list the continuation of the Iran-Iraq war, the chain murders, and the taking of American diplomats as hostages as issues that should be confronted and questioned openly. Each of these subjects have long been taboo in Iran.

The idea of radical change, passionate idealism, and progressive popular movements are rarely associated with recent Iranian history, largely ignored by the press and has been brutally suppressed by the authorities. Yet this spirit, this passionate defiance of dictatorship and fearless hope for change has prevailed in the country despite having suffered successive dictatorships. Iran’s civil society and student movements remain a ray of hope, and indeed pride, for a nation that continues to struggle for change.

As in many countries, Iranian students have historically stood on the front lines of change. On December 7, 1953, students from the University of Tehran went on strike to protest United States’ support for the dictatorship of the Shah. This was only months after a CIA-backed coup removed the democratically elected Prime Minister, Mohammad Mossadegh. The Shah’s forces, buoyed by the coup, opened fire on the student protestors, killing three people. The incident sparked outrage and the date would go on to be observed as National Student Day in Iran, to honour those who struggled for freedom, and continue on that path.

The Iranian student movement has challenged dictatorship and tyranny, both the Shah’s and the clerical regime’s. Over the last three decades they have challenged both moderate and hardline presidents. The protest movement reached its pinnacle in the bloody 1999 student protests in Tehran, when dozens were killed and thousands of students were detained. It should be noted that Hassan Rouhani, the current and supposedly moderate president of Iran, was then secretary of the Supreme National Security Council, and warned protestors that their actions were crimes “that are punishable by death.” Ten years later students would confront the regressive government of Mahmoud Ahmadinejad, and in 2009 take part in mass demonstrations denouncing electoral fraud and the regime’s lack of legitimacy.

It is important to note that despite attempts to characterize the student movement as being centred on reform, university students have in fact been vocal in their challenges to supposed reformists like Khatami and the so-called “moderate” Rouhani. This past August, 92 student groups penned an open letter to Rouhani and blasted his administration for failing to fulfil promises of reform and progress. This includes the blacklisting of politically active students—often referred to as “starred students”—who are expelled from universities and denied re-entry to complete their studies. Rouhani’s administration claimed they would put an end to this practice, a promise which remains unfulfilled.

Student activists remain a target of the regime. This includes activists like Arash Sadeghi, who has spent more than 50 days on hunger strike while serving an unjust 15-year sentence for political crimes.

In his speech, the Amir Kabir university student also touched on what is perhaps the most pressing subject of all: Tehran’s involvement in the destruction of Syria and the massacre of its people. “I believe history will condemn us because we have been silent about Syria and the terrible genocide that’s taking place,” the student leader said. Addressing Ali Motaheri, a member of parliament who was in attendance at the rally, he said, “as a representative of the people I ask you, are we on the right side in Syria? Five hundred thousand people have been killed. It is easy to cite a number, but an entire generation are being wiped out…. We are surely guilty when confronted by the tears of Syrian children.”

As the world watches Aleppo burn, this young man eloquently described the reality of Iran’s involvement in the destruction of a country, and put his own freedom at risk by speaking out against this injustice.

A similarly passionate speech was given by another student at Tabriz University, who hailed the history of the student movement in Iran and criticized the repressive political climate in the country. He ended the speech with breathtaking, if subtle, defiance, offering the following remarks as the moderator literally pulled the microphone from his hands:

“They may imprison and oppress us as students, but no, the student movement is not something which can be destroyed. This idea is lasting, because it is just. This idea will find its place in society and in history. If today this flag falls from our hands, tomorrow someone else will pick it up…. And the future is ours. Have faith in the belief that the future is beholden to the student movement and actions of the just revolutionary.”

The remarks are interesting not only for their content, but because the speech included a direct reference to a famous speech given by Mousa Khiabani, one of the main leaders of the People’s Mojahedin of Iran (PMOI) (sometimes referred to as Mojahedin-e Khalq (MEK)) shortly after the 1979 revolution. The student’s speech repeated Khiabani’s lines almost verbatim with regard to the everlasting appeal of a just cause or idea, and the notion that even if individuals fall someone will take up the flag and continue the struggle. The PMOI is outlawed in Iran, and any association with such groups can result in lengthy prison terms and execution.

The Tabriz University student’s speech was surely a nod to the revolutionary climate that prevailed in Iran’s universities during the 1970’s, when various revolutionary groups across the country were comprised of students, and the sense of impending victory over the forces of the old and evil filled everyone with a sense of optimism and hope.

And hope is something we all need right now. I have always stood in awe of Iran’s history, particularly its revolutionary movements and the courage of its ordinary citizens. This past week I was reminded that these are not simply relics of the past, but a spirit which is still alive and well today. The speeches given by these two courageous young men give me hope that truth, justice and courage have not lost their way in Iran, if you know where to look.

U.S. policies may have contributed to Iran revolution, study says

Los Angeles Times: A new report based on previously classified...

By Pooya Stone The leader of an Iraqi Shia...