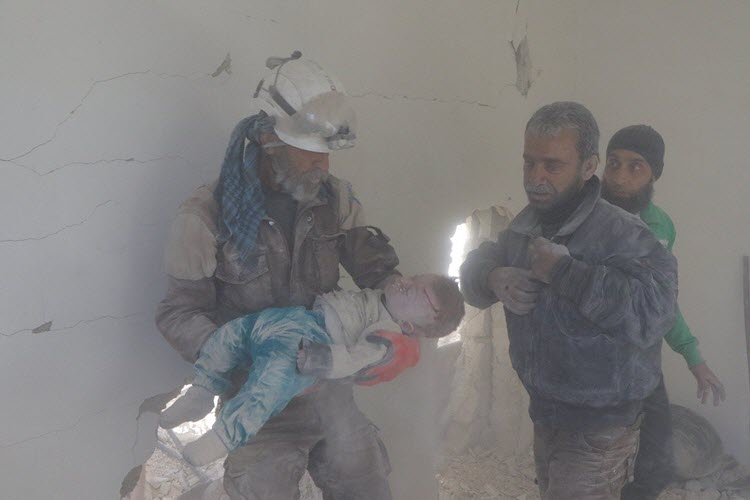 London, 21 Dec – Maryam Rajavi, president-elect of the National Council of Resistance of Iran, which includes MEK, said Tehran’s actions show a “complicity in the most atrocious war crimes and crimes against humanity in the 21st century.” Writes Rowan Scarborough in The Washington Times on Tuesday, December 20, 2016, in his informative article regarding the latest state of affairs in Aleppo, the following is the full text:

Iran’s brutal Islamic Revolutionary Guard Corps Quds Force has played an extensive role in the rape of Aleppo, building a network of bases around the Syrian city and directing militiamen from Lebanon, Iraq and Afghanistan to do the killing, an Iranian opposition group says in a new intelligence report.

“The fact is that Aleppo has been occupied by the IRGC and its mercenaries,” says the People’s Mujahedeen of Iran, or MEK, the largest opposition group to the Islamic mullahs who rule Iran. “Mass executions, preventing the transfer of the civilians, including women and children, [and] attacking the civilians has all been done by the forces of the mullahs’ regime.”

The MEK says in its report provided to The Washington Times that the Corps has amassed an army of 25,000 Iranian and militia troops in and around the burned and cratered Aleppo. These include homegrown Syrian mercenaries who receive cash transferred from Tehran to Damascus.

Maryam Rajavi, president-elect of the National Council of Resistance of Iran, which includes MEK, said Tehran’s actions show a “complicity in the most atrocious war crimes and crimes against humanity in the 21st century.”

The U.N. puts the overall death toll in Syria’s civil war at 400,000. More than 30,000 have died in the Battle of Aleppo, a last urban rebel holdout against President Bashar Assad’s regime.

“The blood for these atrocities are on their hands,” President Obama said last week of Iran, Russia and the Syrian regime.

For more than a decade, the MEK has established a good track record of accurately reporting misdeeds by Tehran, including its attempts to hide nuclear weapons-related facilities from U.N. inspectors.

In this case, the MEK has relied on its spying network inside the IRGC and the regime to cobble together a picture of Iran’s deep military involvement in keeping Mr. Assad in power.

With its growing military presence in Syria and Iraq via militias, plus its influence among Hezbollah militants in Lebanon and Houthi fighters in Yemen, Iran is on a path to expand its goal of hegemony over the Middle East.

The Institute for the Study of War, a nonprofit research group in Washington, has reported that Iran organized thousands of Shiite militias in Iraq not only to fight the Sunni Muslim Islamic State there, but also to deploy them to fight rebels in Aleppo.

The Times recently interviewed Iranian dissidents who had escaped to Western Europe. They said Iran’s brutality at home and aboard has increased, not decreased, since the landmark nuclear deal with the U.S. that provided Tehran billions of dollars.

The MEK report provided to The Times says that Syrian government forces are scarce around Aleppo, meaning it is Iran doing the lion’s share of offensive maneuvers and killings.

The United Nations has approved putting monitors in Syria to try to protect innocents fleeing Aleppo. Such exits in the past have seen evacuation convoys attacked and even bombed.

The MEK said the attacks are the work of Iran.

“On two occasions the transfer of Aleppo residents were hindered and their buses were fired upon under the instructions of the IRGC to gain concessions on the residents [of] al-Foua and Kefraya,” said the MEK, referring to two towns north of Aleppo.

The MEK report on Syria identifies Iranian leaders in Aleppo, the locations of bases, the foreign militias doing the killing and how Iran pays them.
The MEK intelligence report states:

• The IRGC established a headquarters at Fort Behuth, 20 miles south of Aleppo. Lebanese Hezbollah, a U.S.-designated terrorist group, also commands its fighters at Behuth. Mr. Assad had used the garrison as a center for production of chemical weapons, ammunition and missiles. There are satellite facilities nearby that Iran is using to produce missiles. MEK provided a Google Earth photo.

• The Quds Force, the IRGC’s foreign terrorist group, is leading Iraq, Afghanistan and Pakistani militias. The Iraqis are part of the Popular Mobilization Front made legal by the Shiite-led government in Baghdad. Among them are groups that killed nearly 500 U.S. service members during the first Iraq war. They have permanent bases, including one near the Damascus airport.

• In one transaction, Iran transferred $860,000 dollars to the Iranian Martyr Foundation in Damascus to pay Syrian mercenaries. MEK provided what it says are the original messages arranging the payment.

“There is no doubt that the Iranian regime is the primary obstacle to any solution in Syria,” said Shahin Gobadi, MEK’s spokesman in Paris. “The current situation in Aleppo and the role of the Iranian regime in the atrocities committed on the ground require the immediate expulsion of the IRGC and its mercenaries from Syria. By meddling in other countries, the mullahs try to cover up their vulnerability at home. The survival of the regime has been intertwined with maintaining the Assad dictatorship in power in Syria.”

State Department spokesman John Kirby was asked Monday whether the U.S. will protest to the U.N. Security Council the fact that Gen. Soleimani has been spotted in Aleppo. The U.N. has banned him from international travel for his role in terrorism.

“We do intend to consult with our partners on the Security Council about how to address our concerns with this,” Mr. Kirby said. “We’ve long said that Iran needs to choose whether it’s going to play a positive role in helping peacefully resolve conflicts such as in Syria or whether it will choose to prolong them. And you’re absolutely right: His travel is a violation.”

“Without Iran’s expanding military intervention, the Assad regime would have fallen months ago,” Mr. Phillips said. “While Russia’s military intervention has dominated media coverage on Syria, Iran has been responsible for almost all of the ground offensives in recent months that clawed back territory from the rebels and encircled Aleppo. It has deployed thousands of Revolutionary Guards.”

Iran’s Fars News Agency has filed several reports this week telling of glorious victories in Syria. It reports that people it calls “militants” are surrendering in Aleppo and other towns to the Syrian army.