Many Reasons for Trump to work with the Iranian opposition 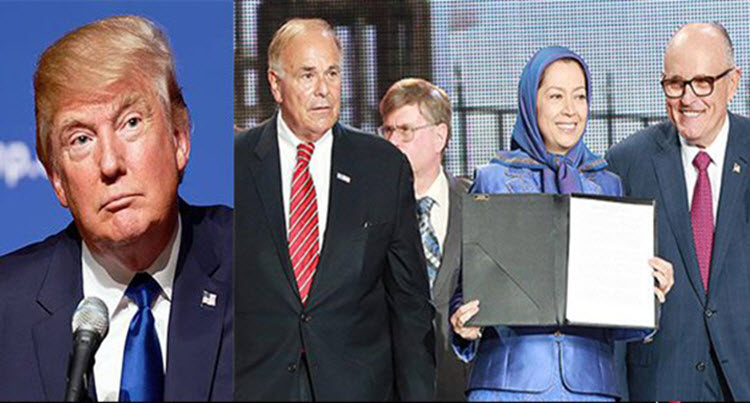 London, 19 Jan – In an article by Amir Basiri, an Iranian human rights activist in the Washington Examiner on January 18, he writes that President-elect Trump will be inheriting several foreign policy challenges from the outgoing Obama administration.

Iran is one of the most complicated problems, that Basiri calls, “a rogue state that is the leading state sponsor of terrorism and Islamic fundamentalism, a major human rights violator, and the only extremist entity that is enriching uranium with an international mandate.”

He criticizes the Obama administration, saying, “Eight full years of appeasement…have done nothing to curb the Iranian regime’s hostile behavior and evil intentions, and has resulted in exacerbated sectarianism across the Middle East region and the rise of extremist groups such as the Islamic State.”

Proponents of the appeasement policy claim that open military warfare against Iran is the only replacement to their approach. However, 23 former top United States government officials have a different opinion.

The former officeholders hand delivered a letter to Trump, highlighting another approach, that being to recognize and defend the basic rights of the Iranian people to “exercise their sovereign franchise free of brutal repression” instead of engaging with the ruling regime.

The signatories of the letter, which include former New York City Mayor Rudy Giuliani, former Sen. Joe Lieberman, D-Conn., and retired Army Gen. Hugh Shelton, urge the incoming president to work with the National Council of Resistance of Iran (NCRI), who is the main opposition to the regime ruling Iran.

The NCRI and its main constituent, the People’s Mojahedin Organization of Iran (PMOI/MEK), seek a secular and democratic state, free of nuclear weapons and ambitions, that coexists peacefully with its neighbors.

Support for the NCRI and MEK comes from politicians, activists and prominent figures across the world, and vast numbers of political and religious beliefs who have voiced their support for the group by attending their annual gathering every year.

The MEK was the first party to blow the whistle on Iran’s nuclear program, and also provided information regarding Tehran’s terrorist plots and activities in foreign countries.

The MEK also provided intelligence on Iran’s Revolutionary Guards Quds Force that helped save many lives, including those of U.S. soldiers serving in Iraq.

The NCRI and MEK are a strong ally to counteract Iran’s behavior on the regional and global scale, due to their vast support and resourcefulness. Moreover, the organization represents tolerant Islam, so the MEK will be the ideological defense against the tide of extremism and sectarianism emanating from Tehran.

The manner in which Trump deals with the Iranian challenges will have a great impact on how events will unfold in Iraq, Syria, Yemen and the Middle East in general.

Maryam Rajavi, the president-elect of the NCRI, stressed time and again, that neither appeasement or an external war will put an end to the Iranian regime’s hostility. Support for democratic regime change by the Iranian people and their resistance will allow the international community to be able to bring peace to Iran and to the Middle East and across the globe.

Basiri concludes that, “Obama failed to heed those words for eight years, and thus missed the opportunity to stand on the right side of history: to his detriment, and to the loss of U.S. allies, the Iranian people, and nations in the region. However, as stalwart civil and military servants of the U.S., some of whom closely advised Trump during his presidential campaign, reminded Trump in their letter, a practical solution is within reach to deal with the multitude of threats posed by Iran. This is advice the incoming administration should take seriously.”

Iran’s Misery Index Could Be 70 Percent

Iran’s currency has plummeted in the past decade thanks...

UN nuclear watchdog turns up heat on Syria and Iran