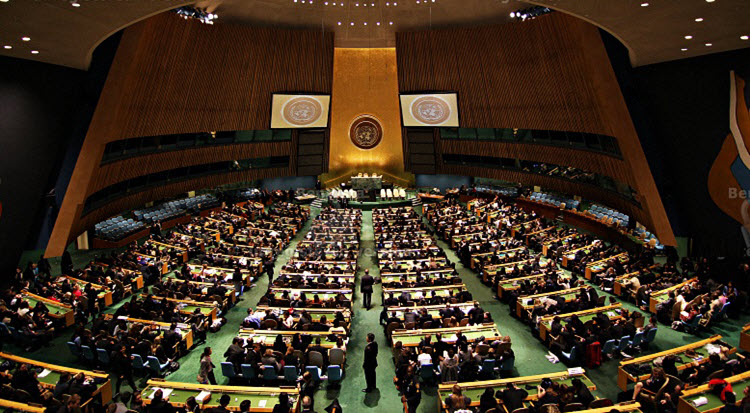 London, 19 Jan – In her January 18 article for Reuters, Michelle Nichols reported that outgoing U.S. Ambassador Samantha Power said on Wednesday that Iran needs a push by the United Nations Security Council, to abide by an arms embargo, amid U.N. concerns that Tehran has supplied weapons and missiles to Lebanese Shi’ite group Hezbollah.

Under the Nuclear Deal Iran made with Britain, France, Germany, China, Russia, the United States and the European Union, most U.N. sanctions were lifted a year ago, when Iran agreed to curb its nuclear program. However, Iran is still under an arms embargo and other restrictions, which, technically, are not part of the nuclear agreement.

Power, at her last Security Council meeting before the Obama administration steps aside on Friday, said that recognizing “progress on Iran’s nuclear issues should not distract this council from Iran’s other actions that continue to destabilize the Middle East.” The U.N. secretary-general is required to report every six months on any violations of sanctions still in place, under a Security Council resolution enshrining the 2015 deal.

Jeffrey Feltman, U.N. political affairs chief, briefed the 15-member council on the second U.N. report, saying there were no reports of nuclear-related or ballistic missile-related violations of the council resolution.

Still, the report did express concern that Iran might have violated the resolution by supplying arms to Hezbollah. Tehran had no intention of complying with the arms embargo or ballistic missile restrictions, according to what Iran’s senior nuclear negotiator said in 2015.

“We on the council need to come together to push Iran to effectively implement the binding provisions of resolution 2231 – especially restrictions that ban Iran’s export of arms and related material,” said Power, but did not specify how.

Although the council can impose further sanctions over breaches of the arms embargo, Russia and China, both of whom are council veto powers along with the United States, France and Britain, are unlikely to agree to this move, diplomats said.

President-elect Donald Trump has already threatened to scrap the nuclear agreement or seek a better deal. Nikki Haley, South Carolina Governor, and Trump’s nominee to replace Power, said it would be better to review the deal rather than withdraw from it.

At her Senate confirmation hearing on Wednesday, Haley told lawmakers that Iran should be held accountable for sanctions violations. She said, “Anytime that we put sanctions forward we should follow through on those when there are violations.”

EXCLUSIVE: Iraq Weapons — Made in Iran?