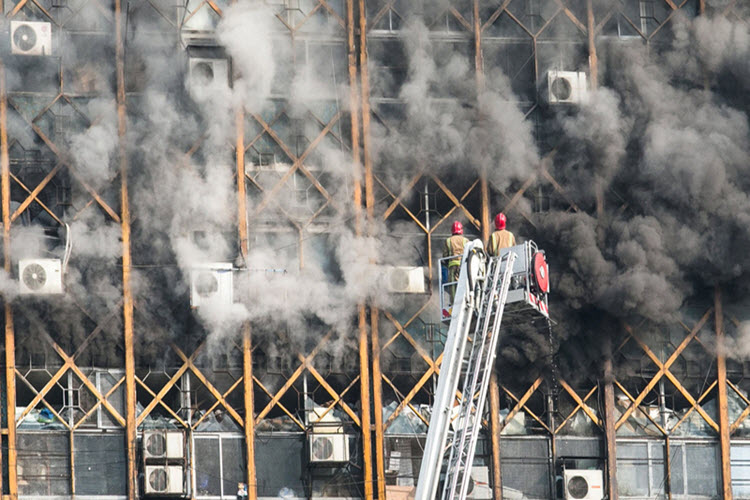 London, 24 Jan – The Iranian Regime has yet again failed to protect its citizens following a building collapse in Tehran, according to a lawyer on the case.

Kambiz Norouzi, a lawyer in Tehran, told the state-run ILNA news agency that Tehranian officials are attempting to absolve their responsibility by claiming to have released warnings about the Plasco Building’s condition.

Norouzi highlighted that these were essentially meaningless, though, as a warning without action is not good enough for a government body.

He said: “Firstly, these warnings prove that Tehran’s municipality has been fully aware of the fatal risks of the building’s non-compliance with safety regulations. Secondly, they have also been aware of the fact that the dimensions of the Plasco Building were so huge that any incident there could turn into a city-wide disaster, which it did.”

He said that the council should have taken measures to prevent the collapse, such as condemning the building or orchestrating a scheduled demolition.

Even state-run papers have criticised the response from the Iranian Government.

Shargh Newspaper, in its January 21 edition, accused officials of trying to pass the buck.

It’s article read: “All authorities …[will] probably come in front of the cameras in order to say that another person is responsible for such incident.”

They demand to know why Tehranian officials cannot protect their citizens.

They said: “Why is Tehran a defenceless city? Why aren’t the fire department and safety services equipped well and with high standards? Why aren’t the safety codes observed in the buildings of a metropolis like Tehran?”

Jahan Newspaper, also in their January 21 edition, wrote the mismanagement impeded the disaster response. It told that 400 rescue vehicles (police, fire, ambulance) arrived in an area with only space for 100 vehicles.

They said: “There was no united crisis management from the start of fire until the collapse of the building. We only witnessed conflicts and clashes among different authorities on the issue of crisis management and no organization followed the instructions of the other.”

It even reveals that in the first three hours of the fire (before the collapse), there were only two firefighters on scene equipped with 50-meter ladders. This shocking mismanagement is unacceptable for a city like Tehran, and the paper refused to allow the disaster to be swept under the rug.

They said: “The first thing that authorities always say after each bitter incident is that [they] had already warned about this… They always [renounce] responsibility and throw blame on others. No matter if the incident has political and social nature or it is a natural or unnatural disaster. There always exists a fixed principal that no person or entity is willing to bear the responsibility of the incident.

The problem will not be resolved with some condolences and by opening a committee, council or media controversy.”

The Plasco Building caught fire and collapsed on January 19

UPI: Iran is ready to discuss building an oil...