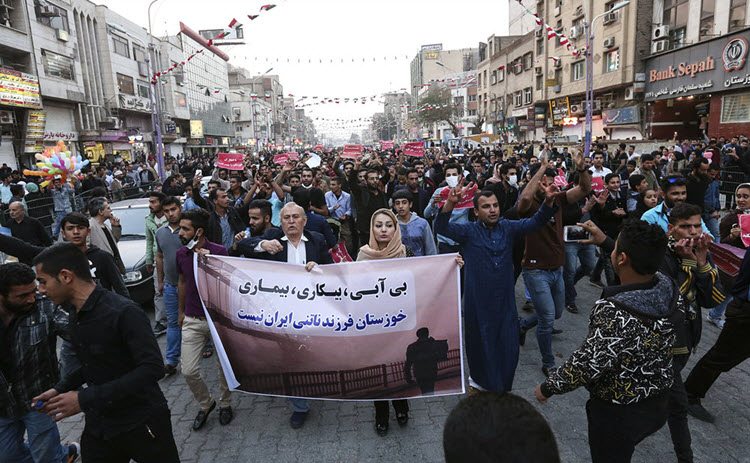 London, 20 Feb – Amid heightened political tensions between the United States and Iran, there is huge unrest in Khuzestan – Iran’s main oil field province.

The Iranian oil supplies are essential to the survival of the clerical regime running the country. Depriving it of the oil supplies spells the end of the regime.

Khuzestan province produces over a third of the country’s water and electricity, and 90 percent of Iran’s revenue comes from oil and gas supplies.

Despite the impressive wealth generated in the region, the people residing there are living in conditions of great poverty. With its Arabic origins, much like elsewhere in Iran, they face social and cultural suppression.

Recent actions by the Iranian regime have resulted in the people having frequent power and water cuts, and the air pollution is of a highly unacceptable quality. The health and quality of life for these people is substandard. There have been too many dams built and ponds and lakes are drying up.

Government offices, schools and universities, and banks have been forced to close across the region and power outages have affected oil production resulting in a massive decline.

Residents have said on social media that the formerly productive oil and gas field are producing nothing but smoke and pollution.

Women protested in the city of Khuzestan against the power and water outages as well as the air pollution. They called on the expulsion of the officials that caused this and reminded that clean air is a basic right.

On the evening of 11th February, clashes occurred and two motorcyclists were shot by police in the Shadegan Dates Bazaar area. Several other people were also injured or killed. Agents of the regime have told families that their loved ones will not be allowed a funeral ceremony.

President-elect of the Iranian Resistance, Maryam Rajavi, in solidarity with the people of Khuzestan province, said that the Iranian regime is behind all the difficulties they are facing. She said: “One cannot expect the mullahs and the regime’s leaders and officials provide any solutions.”

Mrs. Rajavi said that to counter the vile actions of the Iranian regime, the people must stand up against the regime in protest against the problem is it causing for them.

Russia to sell antiaircraft missiles to Iran in billion-dollar deal

1300 Dead From Coronavirus in Iran

By Jubin Katiraie As the coronavirus death toll in Iran...