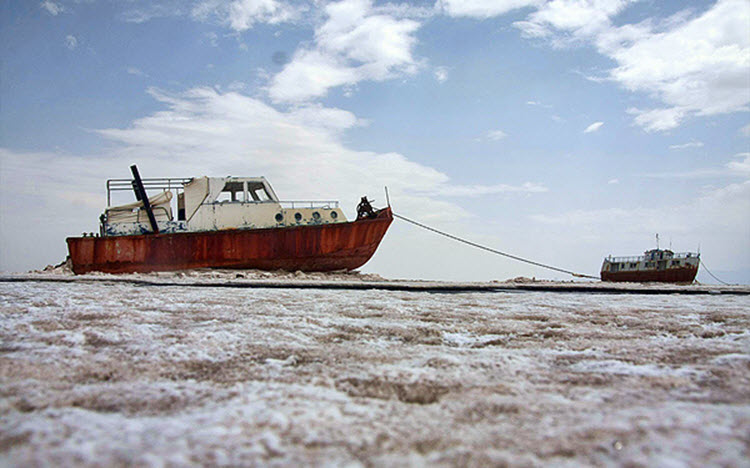 London, 4 Mar – Lake Orumiyeh in north-western Iran – the largest salt-water lake to be found in the Middle East – was during the nineties twice the size as Luxembourg. The lake now, however, has drastically shrunk.

Masoud Tajrishi, the Director of planning and integration of the revival of the lake, criticised the Rouhani government for failing to meet its obligations. He said at the Sixteenth International Exhibition on Environment that the revival of Lake Orumiyeh will fail if the government does not provide funding.

He said that since September last year, contractors have had to leave the project because no funding was made available. Other projects are also in danger he said. “Half of the projects, including projects in dust control and inspection patrols are faced with the problem of continuity due to the lack of funds.”

Last October, Rouhani’s government announced that 300 billion tomans would be allocated to the projects that have planned the revival of the lake.

For the revival to happen in the course of the next decade, Secretary of the headquarters of Revival of Lake Orumiyeh Issa Kalantari said earlier this week that 20,000 billion tomans would be required.

Mehr News Agency said in February that the government has not allocated enough funds in the budget to the revival projects for the 2017 fiscal year.

The lake has been registered by UNESCO as a protected area and was once an important stopping place for migratory birds, including ducks, storks, flamingos and penguins, because of its small rock islands.

Experts believe that if the lake become completely dry it will put many lives at risk. It started drying up in 2000 and now more than 80 percent of the lake has become salt desert.

The Iranian regime likes to report that the main issue is drought. However, international experts and researchers have carried out studies which indicate that only a 5% decrease can be attributed to drought.

The rest of the decrease is attributed to destructive projects carried out by the IRGC such as excessive well building and the digging of deep wells. Another major factor is the construction of the 15km long road that runs across the lake.

Experts say that the drying up of Lake Orumiyeh will lead to change in the local climate – it will go from mild to hot, and the salt winds and other dangerous elements will cause serious health and respiratory issues for people in the area and up to 500 km away.

President Rouhani, during the election campaign vowed: “I promise you that if you put the executive responsibility of the country on my shoulders, in the first day of the government, solving the problem of the Lake will be put on the agenda.”

Four years later he has not fulfilled this promise. Instead, billions of dollars are sent abroad to fund terrorism and to meddle in the affairs of other countries.