Maryam Rajavi: Overthrowing the Iranian Regime in Indisputable and Inevitable 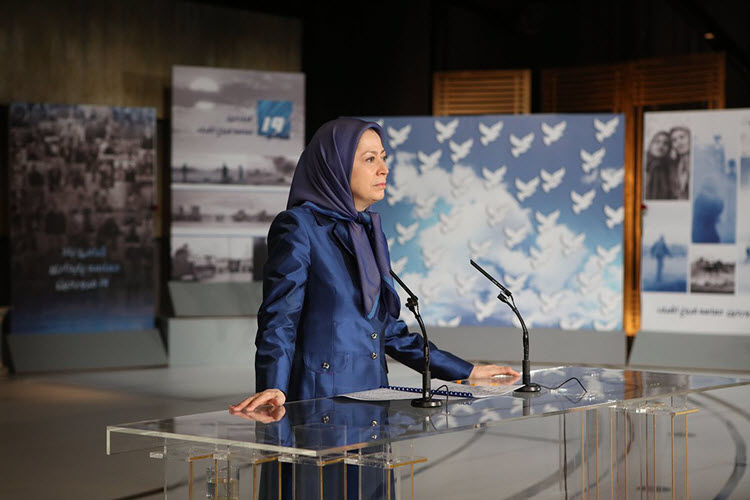 London, 10 Apr – The president-elect of the Iranian Resistance gave a speech in Albania on Saturday, in which she stated that the Iranian Regime will be overthrown.

Maryam Rajavi was commemorating the sixth anniversary of the battle of Camp Ashraf in which 36 members of the Iranian Resistance lost their lives.

The members of the People’s Mujahedin Organization of Iran (PMOI/MEK) had fled Iran and were living in exile in Iraq when the Regime found them.

Rajavi said: “[It was] an unequal confrontation between residents of Ashraf who were empty-handed but proud on one hand, and the armed forces of the clerical regime’s puppet government in Iraq who were armed to the teeth, on the other.”

She continued: “In the end, however, Khamenei and Maliki were the ones who failed to conquer Ashraf. And the PMOI (MEK) were proud and triumphant despite their wounds and the loss of their loved ones.”

It is always important to remember the names of those who have fallen.

Rajavi said: “We will keep the flames of your memories and names, each and every one of you, alight and alive forever. The flame of your sacrifice will remain alight in our souls until your people will embrace their long-yearned for freedom.”

The brave men and women who died in the attack on Ashraf were:

Rajavi quoted her husband, the former leader of the Iranian Resistance: “Hail to you who delivered on your promises to fight with all your power in the most amazing and startling manner… Hail to you who taught new lessons to modern humanity, lessons that are unprecedented in the history of all nationalist, patriotic and revolutionary wars… This is our enormous sacrifice for Iran’s freedom.”

Rajavi encouraged those listening to her to continue fighting for a free and democratic Iran; noting that the Regime is scared of the Resistance forces and the uprisings of the Iranian people.

She said: “The ruling mullahs in Iran hear the rallying cries of the PMOI (MEK), the army of freedom and the Iranian Resistance in every popular uprising which will ultimately put an end to their religious tyranny. Yes, the overthrow and termination of the mullahs’ regime is certain and inevitable.”

She encourages every democratic government to work with the Iranian Resistance in order to defeat the Regime and achieve peace in the middle east.

She said: “Eviction of the godfather and main state-sponsor of terrorism in today’s world is requisite to global and regional peace and tranquillity and the uprooting of fundamentalism and terrorism.”

Rajavi discussed the upcoming state elections, in which the Regime had put forth a candidate who was a key player in the 1988 massacre of 30,000 political opponents and encourage the Iranian people to boycott the elections.

She continued: “The overthrow of the mullahs’ religious tyranny and the establishment of freedom and democracy are within reach, and will be realised with the toiling efforts of the Iranian people and youths and by setting up 1000 bastions of rebellion and 1000 Ashraf’s.”

For the full text of Rajavi’s speech, please visit the National Council of Resistance of Iran.