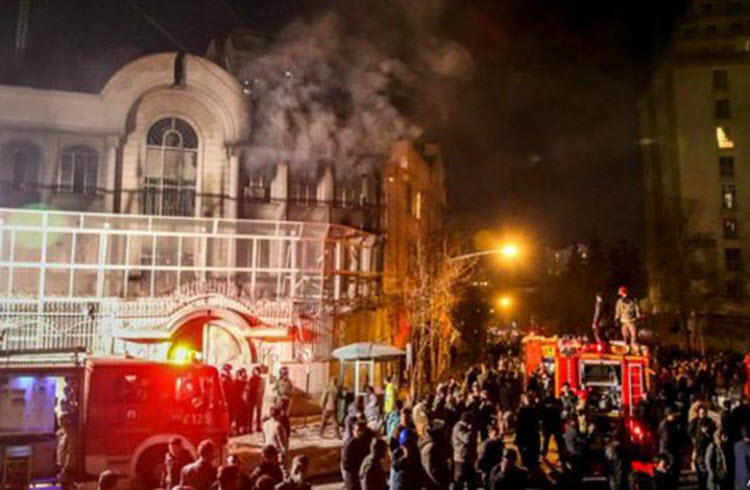 London, 9 May – The Iranian Foreign Minister, Javad Zarif, inadvertently admitted that the Iranian Regime knew about the attack on the Saudi Embassy in Tehran and the Saudi Consulate in Mashhad before they happened, in a speech on May 4, 2017 (known as Teacher’s Day in Iran).

Zarif, who was giving a speech on the Iranian RRegime’s foreign policy and its current status with regard to international relations at the Faculty of International Relations, called these attacks “badly managed”.

He said: “On the day of [the] attack on the Saudi Embassy, we were in the Supreme National Security Council meeting and we all agreed that if the Saudi Embassy is attacked, it gives an excuse for a new mischief by the Saudis, and this is what happened.”

The Iranian Regime has previously attempted to shift blame to civilians, who it called “angry people”, but if that were true, how would the Regime know about it before it happened? And more importantly, why didn’t they stop it?

The top levels of the Iranian Regime knew about this attack because only they are on the Supreme National Security Council; this includes:

• The Speaker of the Parliament, Ali Larijani

• The Head of the Judiciary, Sadeq Larijani

• The Secretary of the Supreme National Security Council, Ali Shamkhani

• The Chief of Staff of the Armed Forces of the Regime, Ataollah Salehi

• The Chief Commander of the IRGC, Mohammad Ali Jafari

• The Minister of Intelligence, Mahmoud Alavi

Zarif’s bizarre defence is that the Regime knew that the Saudis would react badly to an attack on their buildings but again, the people listed above should have been able to prevent an attack that they knew about before it happened.

They just decided not to and the only logical explanation for that is that they planned and executed the attack with the help of their hired thugs.

During this meeting, Zarif also discussed its foreign policy with the US which has taken a turn for the worse since Trump took office, mainly because of the Iranian Regime’s ballistic missile strikes, their attacks on US naval ships in the Persian Gulf and their support for the Syrian dictator, Bashar al-Assad, even after his chemical attacks on his own people.

Zarif said: “When Mr Trump became the US President, some said Trump had internal problems and would not want to enter crises abroad. One incident, the chemical situation in Syria, which is even worse if it is fake, caused US program to change 180 degrees. Now some say it was predetermined… whatever it was, whether a conspiracy or design, caused the history to change. An incident in Syria caused the upset and this is due to the situation of international relations.

During bipolar era, it was not seen often that an incident could change the course of history. So we need to pay attention to these developments and analyse it.”

So, Zarif appears to be accusing the US of conspiring with the Syrian Resistance and dropping a chemical bomb which killed nearly 100 civilians but Zarif is high enough in the Iranian Regime to know that the chemical attacks are indeed being perpetrated by Assad’s Regime and that the Iranian mullahs are helping him.

Iran to ensure oil supplies to India until end of month