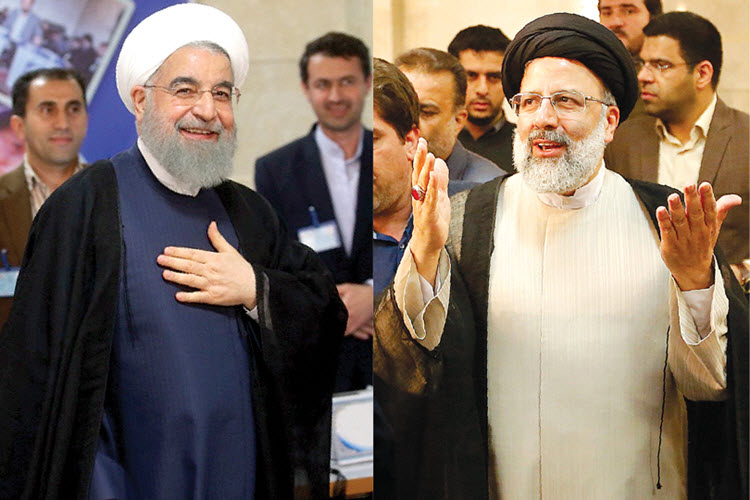 London, 10 May – The Iranian President, Hassan Rouhani, has recently rebuked the security forces, the Shiite clergy forces, and his rivals ahead of the presidential elections next week.

He called them “extremists” and criticised the arrest of reformist leaders, which is strange because he has overseen the arrest, torture, and executions of hundreds of political protesters over his four-year presidency.

He specifically attacked his main rival Ebrahim Raisi for a record of “execution and imprisonment” as Raisi was a member of the infamous Death Commission that sent 30,000 political prisoners (mainly members of The People’s Mojahedin Organization of Iran (PMOI)) to their deaths in 1988.

So, both of the leading candidates in the Iranian election have a bloody history of murdering political activists.

Rouhani then criticised the tax-exempt status of a charitable foundation linked to Iran’s supreme leader, Ali Khamenei, and managed by Raisi.

He also suggested that the Revolutionary Guard Corps (IRGC) is attempting to sabotage the 2015 nuclear deal between Iran and the P5+1 world powers.

So Rouhani is saying that he, as the President, had no knowledge of the secret nuclear sites that were set up in Iran to work on advanced centrifuges in direct violation of the nuclear deal? Does that sound likely?

Reza H. Akbari, the program manager at the Institute for War and Peace Reporting in Washington, said: “It is clear that Rouhani is in full offensive mode and will adopt a no-holds-barred approach prior to the final debate [scheduled for Friday].”

It is thought that Rouhani is acting this way because, unlike other incumbent Presidents, he may not easily win a second term. This is because the economy has become stagnant and the Iranian people are in poverty, despite sanctions relief.

Last week, Rouhani visited the site of a coal mine explosion which killed 42 workers and was greeted by protesters who kicked and beat the president’s car.

Akbari said: “The visit may have been a shocking revelation for Rouhani, who might be losing popularity within the working class.”

Of course, the Regime as a whole is not accepted or supported by the Iranian population. That is why protests against the Regime are ever-increasing and the Regime fears that mass protests will spark following this election.

Following the 2009 election, there were mass protests in the streets of Iran and three of the top leaders of the movement were arrested. In Rouhani’s original 2013 campaign, he promised to release the leaders but he has still not released them.