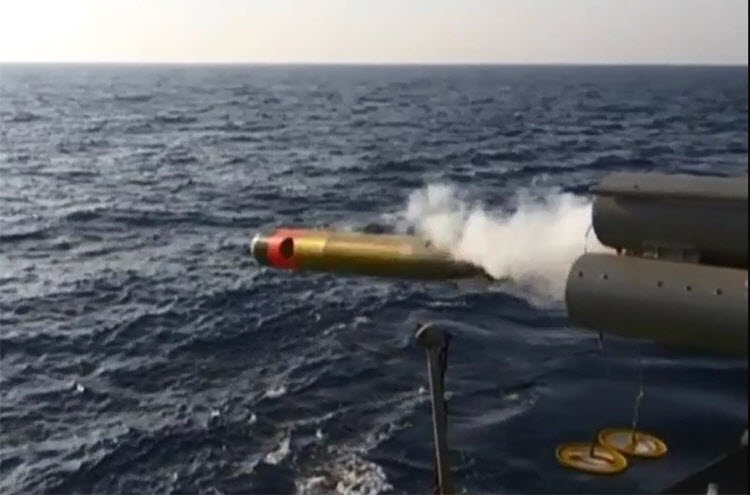 London, 10 May – The Iranian Regime tested a high-tech torpedo near the Strait of Hormuz on Sunday, according to US officials.

The Iranian missile, called Hoot, is supposed to be based on a Russian model (the Soviet-era Russian VA-111 Shkval) which is considered to be the fastest in the world.

The Russian model is capable of travelling 200 miles per hour (four times the speed of an average torpedo), by using a technique known as supercaptivation. According to security analysis group IHS Jane 360, this involves vaporising the water around the torpedo.

The Iranian version, which was first seen in low-quality footage from 2006 and again in 2015, is reportedly capable of speeds up to 250 miles per hour and has a range of about six miles.

Although the Iranian Regime has not yet confirmed their test, which reportedly was done to evaluate the speed as it was not aimed at any particular target, they have been particularly vocal about increased military funding and attempting to show off their military might.

Iran is currently in the midst of fighting two civil wars (Syria, propping up the Assad dictatorship, and Yemen, trying to overthrow the internationally recognised government) as well as funding terrorist activity throughout the region.

It is also on the opposite sides in these wars to the US and Saudi Arabia; two countries with far greater military power than Iran, who are unlikely to be intimidated by military parades and missile tests.

It also appears that this missile test does not violate the nuclear deal, which restricts Iran’s development of nuclear weapons (although they have violated it in other ways), or the United Nations resolutions against ballistic missile tests (although, they have also violated that in recent months).

However, it could antagonise and infuriate Donald Trump who despised the nuclear deal and vowed to be tough on Iran for infractions like this. And he’s not the only one in his administration to feel this way.

Last month, Secretary of State Rex Tillerson delivered a report to Congress that stated that Iran was mostly in compliance with the nuclear deal (before the reports of a secret site were revealed) but he still referred to the deal as a “failure” which couldn’t prevent Iran from obtaining nuclear weapons.

Iranian Foreign Minister, Javad Zarif, called these comments “worn out US accusations”. For its part, Iran has always denied that its nuclear weapons programme was for military purposes, but just how do you use nuclear weapons peacefully?

Reuters: The Australian chairman of the U.N. Security Council's...