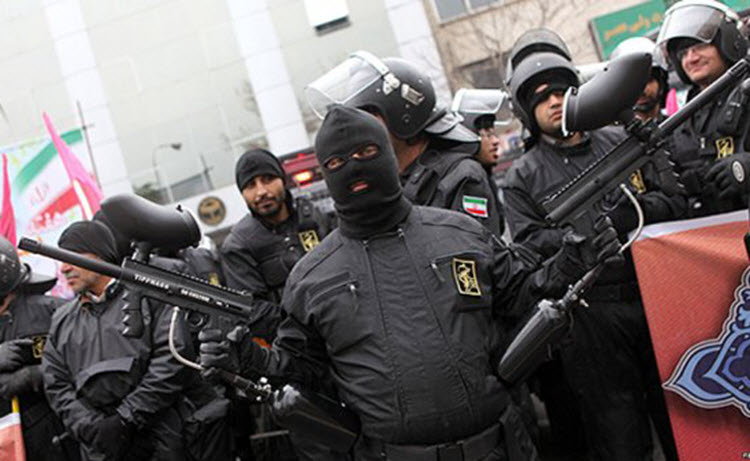 London, 18 May – The Iranian Regime is preparing to enforce repressive measures against any citizens who protest this Friday’s presidential elections.

Some reports indicate that security service personnel have been doubled in the past few weeks, as the Regime fear a protest on the scale on the 2009 Green Revolution, when the election result was said to be faked.

The Supreme Leader, Ali Khamenei, has already labelled anyone who protests during the election an “enemy” and threatened violence against them, while Ali-Asghar Ahmadi, the head of the regime’s State Election Committee, and Hassan Karami, head of the police special commandos, have both reported that the size of the repressive police forces have grown significantly in the run-up to the election.

Ahmadi said: “The police is in charge of implementing security. … They can make up for any deficiencies in their forces through the army, the IRGC, the Intelligence Ministry and the Bassij. We truly have full trust and faith in them.”

Hossein Zolfaqari, head of security in the regime’s election committee said: “Security preparations, intelligence awareness and planning by the rapid response units has been planned such that any action that aims to disrupt security and order during the election would be dealt with firmly in the quickest possible timeframe, and we will decisively prevent any form of insecurity.”

Their other concern is the popular idea of an election boycott by the people; given that there is no real choice between the candidates, many Iranians will choose to stay home rather than go to the polls.

Many in the Regime-affiliated press are quick to blame the Iranian Resistance, specifically the People’s Mojahedin Organization of Iran (PMOI), for attempting to influence the elections but they fail to note that the Resistance is the only opposition to the Regime and that the Regime is widely hated among its citizens.

They are even accusing the Resistance of faking the 1988 massacre of 30,000 PMOI members by the Regime; a strange move given that many in the Regime have admitted it.

The truth is that the Iranian Regime is terrified of their own people, who are calling loudly for Regime change with slogans like “No to the executioner, no to the demagogue”, “My vote [is for] regime change; long live the National Liberation Army” and “Our vote regime change; Our choice is Maryam Rajavi.”

Maryam Rajavi, the elected leader of the Iranian Resistance forces, would be the choice that many Iranians would make if given the choice but opposition candidates are not allowed to run in the Iranian Regime elections.

Iran says no to any nuclear suspension

AFP: Iran on Sunday reaffirmed it would not consider...