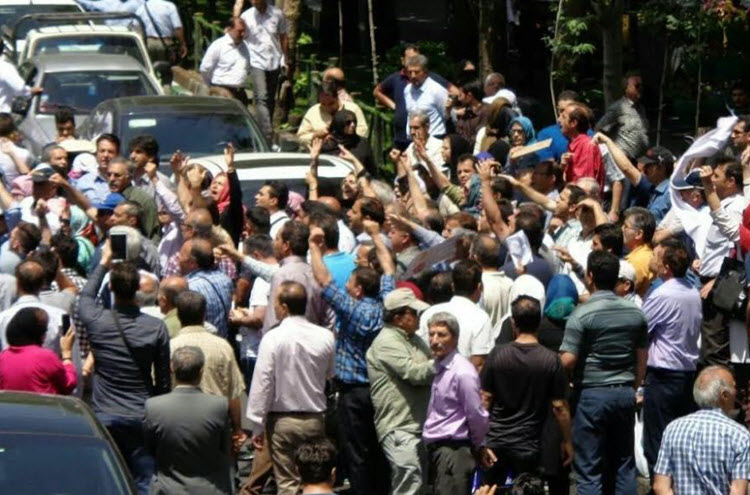 London, 21 Jun – The Iranian Regime’s police force was caught on tape brutally beating customers who were gathered outside of various branches of the Samen-Hujaj financial institution in Tehran on Saturday, June 18.

The video shows police kicking, punching and using batons to attack the people, who were merely trying to get their money back, after reports of the company going bankrupt surfaced.

This wasn’t the only attack on civilians by the Regime’s officers that was caught on film last week.

On Thursday, June 15, the police force set upon a peaceful protest by laid-off mine workers and their families at the Aqdareh gold mine in Western Azerbaijan province.

This violent attack has left thirteen people requiring medical care, but because they fear the retribution of the so-called security forces, many have travelled to hospitals in the next town over or sought private treatment in their homes at incredible expense.

The protesters were merely seeking employment and were protesting the decision by the mining company not to hire local workers, given the negative effect the mine has of the ability of local people to earn money in other ways.

Aqdarreh gold mine is the second largest gold mine in Iran, located just 30km from Takab city, and it produces 2.2 tonnes of pure gold every year. Its owner, Aqdareh Pooyazarkan Mining Company is the first gold mining company in Iran.

However, since mining began in 1997, there has been a detrimental effect on the local area’s ecosystem, environment and ecology due to the chemicals being used to extract gold.

As a result, many farmers have lost farming lands and the ability to raise animals; excess cyanid discharge has killed animals, polluted crops, and made the soil less fertile. It has even polluted the drinking water because of a pond built to wash the mine’s mineral extractions. Even if they can grow a crop or raise an animal, no one wants to buy the food because of the risk of contamination.

Villager’s report that deaths and diseases like cancer and lung disease have been steadily increasing since the mine was built.

In 2014, 250 miners at the Aqdareh gold mine held a demonstration against their termination from work. One worker committed suicide, while 17 more were arrested, imprisoned, fined and flogged, over charges of sedition brought by the mine owners.

Japan urges Iran to give up nuclear work

AFP: Japan on Friday urged Iran not to carry...