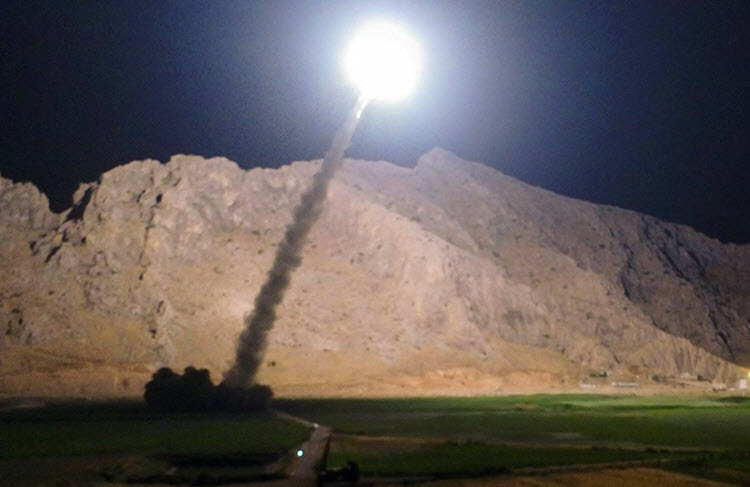 London, 21 Jun – Officials from the Iranian Regime have claimed that their recent missile strikes in Iran have sent a message to not just ISIS, who Iran previously claimed was the intended target, but also to the US.

The Iranian Revolutionary Guard Corps (IRGC) claimed to have launched six missiles from Iran into Deir ez-Zor in eastern Syria, where US-backed troops are combating ISIS, in an effort to show the US that Iran is not going to accept US sanctions against it.

Iran’s ballistic missile programme, which represents a clear threat to the world, was not addressed in the 2015 nuclear deal and has now been subject to additional sanctions.

The Iranian opposition group National Council of Resistance of Iran (NCRI) held a press conference in Washington on Tuesday, which revealed new information about the programme’s hidden facilities, including on linked to the banned nuclear programme, and addressed the need for further sanctions.

Why were missiles launched?

The IRGC claimed that the strike was in retaliation for the terrorist attack which killed 17 civilians in Tehran earlier this month, but many have speculated that the Regime planned the terror attack themselves in order to gain sympathy from the international community as the victims were mainly people protesting the Iranian Regime.

The Iranian Regime has blamed the attack on the Saudis and the US, who they claim supports terrorists, despite the fact that they are fighting ISIS in Syria.

In fact, it is more likely that the Iranian Regime attempted to attack this province, without caring who would get hurt, because they wanted control of it.

The Deir ez-Zor province would provide the Iranian Regime with a key border crossing in order to facilitate the movement of weapons, money and troops between terrorist groups across the Middle East and Iran.

The Iranian Regime ultimately wants to control a Shiite Crescent between the Persian Gulf and the Mediterranean encompassing Syria, Lebanon and Iraq. They already claim control over vast areas within these countries.

Did the strike happen?

If this claim was true, it would be the first example of Iran using mid-range ballistic missiles, needed to travel the 400-mile distance, since the end of the Iran-Iraq war.

However, the Iranians likely didn’t make their target as they announced the death tolls mere minutes after firing the missiles, which would have been far too soon, and no one on the ground has reported a missile attack.

Washington Times: Iran's influence in Iraq is posing a...