Messages of Solidarity for a Free Iran From Brave MEK Prisoners 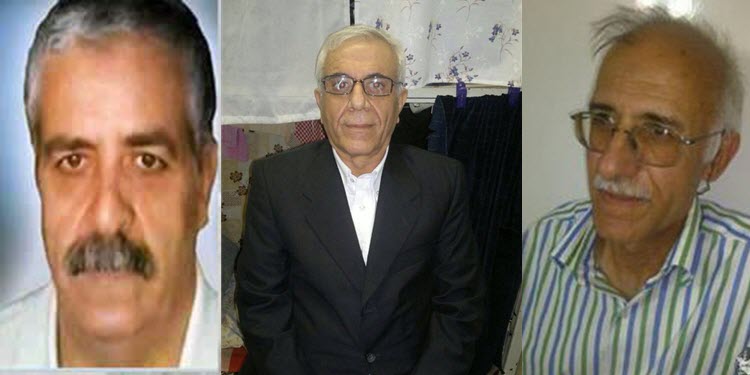 One such prisoner is Mr. Ali Moezzi, 66. He was also a political prisoner in young age, in the 1980s for supporting the MEK. Now, his two daughters are with the MEK, and he has been imprisoned on and off several times since they joined the MEK in Ashraf.

In his message, he wrote, “This gathering echoes the cries of all the enchained people of Iran. It echoes the voice of the deprived, the toiling porters in Kurdistan, the voice of the Sunnis, our Baluchi compatriots, and everyone else. It manifests the pride of Iran and Iranians, it is the symbol of their organized resistance, the democratic alternative and the flag they have hoisted for resistance at any cost to achieve freedom.

“The Iranian people’s historic demands to reach a free and democratic Iran will never be forgotten. Demands such as a pluralist society with fundamental freedoms, separation of religion and state, rights of ethnic and religious minorities, gender equality…

“Mrs. Rajavi was right to say that our only asset is Resistance. She spoke of 1000 Ashrafs and of 1000 bastions of rebellion and resistance. She was right when she said no to the white turbans and the black turbans. Because any effort for a free Iran and a democratic future is not tolerated by the Velayat-e Faqih regime.

“Now, from the corner of this prison cell, I see myself with you and among you in the great and glorious gathering of this year in Paris on July 1. With pride and heart-felt love and hope, I hail each and every one of you who add to our nation’s asset of determination and faith. Hail to you, the delegations, the distinguished guests and hail to Maryam Rajavi, the shining sun and the great honor of Iran.”

Mr. Moezzi was last arrested in 2011, after he participated and gave a speech in support of the MEK in the funeral of another political prisoner, Mohsen Dokmehchi.

Mr. Dokmechi was a renowned Bazaar merchant who supported the MEK and assisted families of MEK martyrs and political prisoners. He had cancer while in prison but was deprived of treatment. Prison officials let him gradually die by going through tremendous suffering.

Mr. Moezzi completed his sentence two years ago, however, officials do not release him and have filed new spurious charges against him.

In January, he was kidnapped from Gohardasht prison after a family visit as he was returning to his cell. He was missing for a long time, until news came that he was under harsh interrogation in solitary confinement in the notorious Ward 209 of Evin Prison.

Now, he is in the Greater Tehran Prison which is a concentration camp. Nearly 70 prisoners have been packed into Mr. Moezzi’s cell made for only 25 men. This is where he wrote his message of solidarity with the great gathering of Iranians for a free Iran.

Another resistant prisoner, Mr. Arjang Davoudi, sent a message of solidarity to the MEK and Iranian opposition gathering in Villepinte. He wrote in his message, “It is not any exaggeration if I honestly and explicitly say that presently, the People’s Mojahedin of Iran (MEK), is the oldest and most organized part of the potential alternative that manages the nationwide struggle of the Iranian people for freedom from the clutches of Khamenei’s mafia and his partners.

“The MEK has become indispensable to our struggle. Therefore, I urge everyone who loves to see a free Iran and thinks of the pride and honor of Iranians to make their best effort to take part in this great gathering in Paris and make this gathering more glorious with their presence.

“We should know that extensive participation of freedom-loving Iranians in such events is greatly heartwarming for resistant prisoners who linger and spend their nights and days inside the Iranian regime’s medieval dungeons.”

Abolghassem Fouladvand also wrote from his confinement in Gohardasht Prison. Mr. Fouladvand is also imprisoned for his support for the MEK.

In his letter from prison, Mr. Fouladvand wrote, “It is time to rise up. The galaxy of freedom, is marching on with strength and determination to overthrow the clerical regime. I would like to join this galaxy and be along your side and stand beside true Iranians, and freedom-loving Iranians. I want to stand with the family of Resistance and the Army of Freedom.

“With such participation and support, I say another resounding NO to the clerical regime and declare my all-out support for the only organized resistance in Iran and abroad. We must know that at this time, there is no middle. Remaining silent and passive is not any different from standing in the ranks of the mullahs.

“I hope that with your active presence, you would be my voice and the voice of my other imprisoned comrades.”

Mr. Fouladvand is married and has two sons. He has two brothers in the MEK.

Shahin Zoghi-tabar is another political prisoner who has been detained for his activities for freedom and in support of the MEK. In his letter from Gohardasht Prison in Karaj, Mr. Zoghi-tabar wrote, “Your presence in the great gathering of the Iranian Resistance is not only a form of declaration of support for the Iranian opposition, but also echoes the voice of the oppressed women of Iran and the child workers. You can be the voice of Iran’s workers, nurses and teachers… By participating in this gathering show the world that the Iranian people’s choice is not the mullahs or the IRGC. Rather, their choice is resistance for freedom.”

Many of those arrested and imprisoned on political grounds in Iran are supporters of the main Iranian opposition force, the MEK or PMOI. They are arrested for their activities to expose the regime’s violations of human rights or for giving financial aid to the MEK.

The activities of MEK supporters during the recent presidential election sham, calling for the boycott of the election, terrified the clerical regime to a great extent. Also their calls for justice for those in charge of the massacre of 30,000 political prisoners in 1988 foiled the efforts of the mullahs’ supreme leader Ali Khamenei who favored presidency of Ebrahim Raissi from his own faction.

Ebrahim Raissi was a member of the Death Committee in charge of implementing death decrees for prisoners who did not renounce their support for the MEK even at the cost of their lives. The public’s outrage over Raissi’s nomination forced Khamenei to back down from his desire and let Rouhani have a second term in office.

The regime’s officials including Khamenei, himself, are seriously alarmed by the presence of the MEK and extensive support for them in society and have stepped up their misinformation against the MEK in the state-run media.

It is in such circumstances that these political prisoners and many others have taken the risk of publicly lending support to the MEK and the Iranian opposition for their annual gathering.

Reuters: NATO states should agree at a summit this...

The Observer: Two women convicted of crimes against morality...