Free Iran Gathering 2017: Regime Change Is Iran Is the Only Option 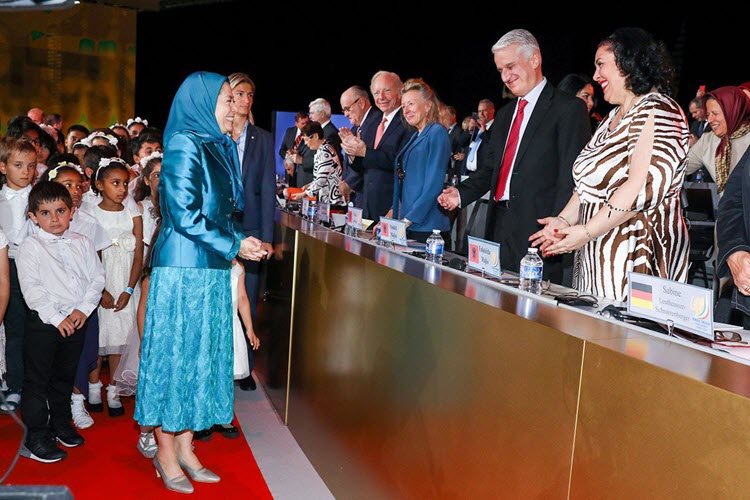 London, 2 Jul – The overwhelming consensus at the Free Iran Gathering in Paris is that Regime Change in Iran is best for the people of Iran and the world at large, and that this change is coming faster than the Regime thinks.

In her keynote address, Maryam Rajavi, the president of the Iranian Resistance forces (NCRI and MEK), announced that in order to achieve a free and democratic Iran, the Regime must be overthrown.

She told the Free Iran Gathering that this overthrow is not only coming, it is coming soon. She also asserted that the Iranian Resistance, who have been fighting for freedom of the Iranian people since before the 1979 Revolution in which the mullahs took power, is the true force capable of toppling the Regime.

Why must the Regime be overthrown?

The Iranian Regime does not believe in human rights, incarcerates its political opposition, and poses a grave threat to world peace.

The Iranian Regime does not respect its own people and regularly violates their human rights, as evidenced by the 1988 Massacre in which the Iranian Regime killed 30,000 political prisoners, most of whom were members of the MEK.

Giulio Terzi, the Former Foreign Minister of Italy, spoke before the Free Iran gathering to warn the international community not to “forgive or forget” the massacre, in which the Regime tried to exterminate their opposition.

Zinat Mirhashemi, a member of the National Council of Resistance of Iran, and Central Committee member of the Cherik-hay-e Fadaii Khalq Organization of Iran, said: “We must support the movement of justice for the victims of the 1988 massacre.”

The Iranian Regime does not respect the other nation-states of the Middle East, as evidenced by their interference in Syria, Iraq, and Yemen.

Prince Turki bin Faisal Al Saud, of Saudi Arabia, said: “The regime is looking for more crises and is therefore using militias to pressure other countries. This is how the regime pursues power.”

Their rule is a threat to the whole world.

British MP Theresa Villiers said: “The Iranian regime is a source of evil in the world. We want a brighter future for the people of Iran.”

Maryam Rajavi said: “The conclusion is what the Iranian Resistance has emphasised since the outset and many in the world have reached today: The solution, and the only solution, is regime change.”

But why can’t we reason with them?

For nearly four decades, the international community has kowtowed to the Regime, waiting for reform from within, providing concessions, and even attempting to contain the Regime.

John Baird, the former Member of the Canadian House of Commons and Minister of Foreign Affairs of Canada, said: “The people of Iran demand and deserve better than the religious fascism ruling Iran…The money spent by the regime on nuclear weapons and terrorism is being stolen from the Iranian people… The policies of appeasement let the people of Iran down.”

Maryam Rajavi said: “The winds of change have started blowing in our homeland. The ruling regime is in disarray and paralysed as never before. Iranian society is simmering with discontent and the international community is finally getting closer to the reality that appeasing the ruling theocracy is misguided.”

Former U.S. ambassador to the UN, John Bolton, promised that the “Iranian regime will NOT reach its 40th birthday”.

Why must the Iranian Resistance be the ones to overthrow the Regime?

The Iranian Resistance (NCRI and MEK), which enjoys widespread support within Iran, has consistently supported the Iranian people’s quest for freedom and have worked tirelessly to expose the Iranian Regime, like the Regime’s secret nuclear weapons programme and the terrorist training camps.

They serve as a government-in-exile, with its leader Maryam Rajavi, serving as the president-in-waiting for Iran; ready to implement their 10-point plan for bringing Iran into the 21st century.

Bernard Kouchner, the former French Minister for Foreign and European Affairs and co-founder of Doctors Without Borders (MSF), said: “The Resistance’s determination about gender equality and freedom and separation of religion and state is what makes the movement successful and stand out.”

Over 100,000 human rights activists, national security experts, and supporters of the Iranian Resistance gathered today to support the notion that Regime change in Iran is not only necessary, but will happen soon. We must stand with them.

Record oil price not due to lack of supply: Iran