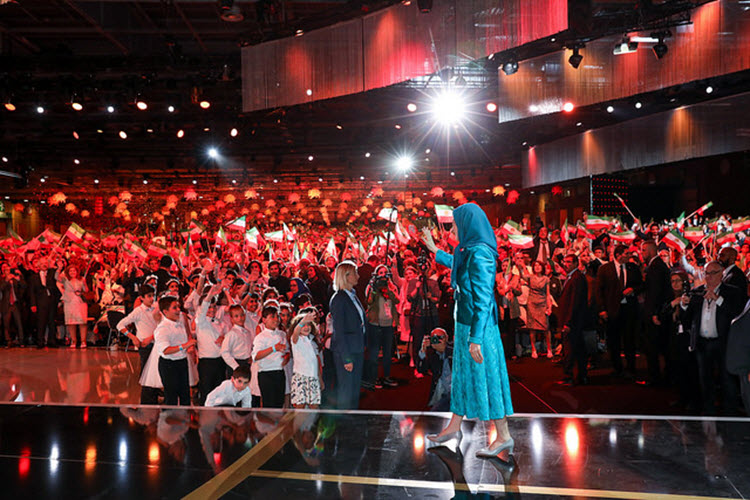 London, 3 Jul – On Saturday, July 1st, a massive gathering of tens of thousands of members of the Iranian Diaspora joined hundreds of dignitaries from the Arab World, the United States and Europe and their supporters in a convention hall north of Paris, where at least 100,000 people voiced their demands for regime change in Tehran. The event, staged annually by opposition coalition National Council of Resistance of Iran (NCRI), was led by its President, Maryam Rajavi.

Mrs. Rajavi headlined Saturday’s rally, where she called upon the international community to acknowledge the Council as the legitimate voice and representative of the Iranian people. She also urged that the appeasement policy be abandoned, and a firm strategy of standing alongside the Iranian people’s true demand of regime change be adopted.

Former New York Mayor Rudy Giuliani said, “You, I, my government and your leadership, we see Iran in exactly the same way. The regime is evil and it must go. #FreeIran.”

“The capital since 1979 of Islamic fundamentalism and terrorism has been in Tehran under this extremist regime, and that is why it’s got to go,” said Senator Joseph Lieberman.

Ambassador John Bolton, former US envoy to the United Nations said, “We must avoid allowing the regime in Tehran to achieve its long sought objective of an arc of control from Iran through the Baghdad government in Iraq, the Assad regime in Syria, and the Hezbollah terrorists in Lebanon.” On July 1, 2017 Bolton tweeted, “Glad to be participating in the Iranian Resistance rally in Paris today. Regime Change is Within Reach. #FreeIran.” (@AmbJohnBolton)

The American delegation issued a statement prior to Saturday’s convention saying, “We believe that change is within reach, not only because the regime is becoming engulfed in crisis, but also because there is a large and growing movement organizing for positive change. A viable organization capable of ending the nightmare of religious dictatorship by establishing freedom and democracy, tolerance, and gender equality has steadily gained visibility, popular support and international recognition.”

The presence of a key Arab World figure, Turki Faisal, former Saudi ambassador in the United States and United Kingdom was significant, especially considering current conditions between Iran and its Middle East neighbors. He said, “The Iranian people are the first victims of Khomeini’s dictatorship. Your effort in challenging this regime is legitimate and your resistance for the liberation of the Iranian people of all ethnicities, including Arabs, Kurds, Baluchis, Turks and Fars of the mullahs’ evil, as Mrs. Rajavi said, is a legitimate struggle.”

The Arab delegation consisted of many former and current officials from more than a dozen countries, who also placed their weight behind the NCRI’s platform to bring about change in Iran.

Mrs. Rajavi, the Iranian opposition leader, delivered the keynote speech of the event.“Our people want a constitution based on freedom, democracy and equality. The time has come for the international community to heed the demands of the people of Iran,” she said.

She also referred to the activities carried out inside Iran by the vast network of supporters affiliated to the People’s Mojahedin Organization of Iran (PMOI/MEK), the leading member of the NCRI coalition, and emphasized the ways the exiled opposition is linked to the restive powder keg society inside the country. “The overthrow of the religious dictatorship is possible and within reach because of the regime’s inabilities, including its inability to contain the country’s economic disintegration and environmental disasters, the inability to provide for the most rudimentary needs of our oppressed people,” Rajavi added.

NCRI President Rajavi also said it is time to make Tehran understand its crimes will no longer go unanswered. “Khamenei and other leaders of the regime must face justice for violations of human rights, crimes against humanity, particularly the 1988 massacre of political prisoners in Iran, and for their war crimes in the region,” she said.

The Trump administration continues to develop its policy on Iran, and Mrs. Rajavi called for sweeping sanctions targeting Iran’s aggression, blacklisting the Revolutionary Guards, and supporting the Iranian people and their organized opposition in their pursuit of regime change. On July 1, 2017 she tweeted, “Blacklist IRGC as a terrorist group and evict it from the entire region #FreeIran” (@Maryam_Rajavi)

“The mullahs’ time is up and the time has come to march forward,” she declared. “This has also been stated in the American Declaration of Independence where it says, ‘whenever any Form of Government becomes destructive of’ the people’s rights, ‘it is the Right of the People to alter or to abolish it, and to institute a new Government’ of their liking.”