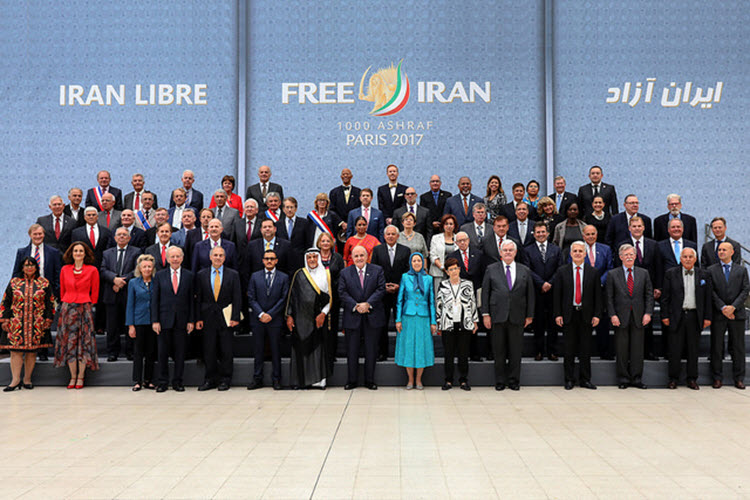 London, 12 Jul – On 1st July 2017, the Iranian Resistance held its annual rally in Paris. There were lawmakers, politicians, dignitaries and former officials from five continents and over 50 countries in attendance, as well as tens of thousands of Iranian people.

The President-elect of the National Council of Resistance of Iran, Mrs. Maryam Rajavi, emphasized that regime change is the only way in which the Iranian people can finally gain the freedom they deserve. This is also important for the ethnic minorities and will end the conflict that has divided Sunnis and Shiites. She also said that the only way for peace and tranquillity to be brought to the region is via regime change. Rajavi emphasized that regime change is possible and is close.

Many of the speakers emphasized that the Iranian Resistance has come a long way. One tangible way of measuring its success is to realise that the thousands of PMOI members that were trapped in Camp Ashraf are finally free. The Resistance has been working for years to free these people and after a long struggle it is one less thing for the Resistance to fight for. Thousands of PMOI members that are now living in Albania joined in the event via satellite.

Gilbert Mitterrand, head of the France Libertés Foundation, welcomed the audience. He said: “Your broad presence here is like a referendum against the clerical regime and it shows the ability of this resistance to a democratic change in Iran. I also have to convey to the organizers of this gathering, the message of gratitude of the French President Francois Hollande (2012-2017). He has said that he will continue to pay attention to the human rights situation in Iran, due to the invitation you have made to participate in this gathering.”

The former Mayor of New York, Rudy Giuliani, highlighted that the United States government is now behind the Resistance and praised those working towards a Free Iran. He pointed out that an alternative exists. There is a huge support for this alternative.

Newt Gingrich, former Speaker of the U.S. House of Representatives, said that the regime must be “destroyed” and the only practical goal “is to support a movement to free Iran”. He said that otherwise the regime will find a way “to get around any agreement and to lie about everything”.

Prince Turki Bin Faisal Al-Saud from Saudi Arabia said: “This gathering is a place of assembly for all Iranians who left Iran due the oppression of the Velayat-e Faqih regime. Along with the representatives of many countries in the world who have suffered from the terrorism of this regime, the regime that is the biggest sponsor of terrorism. The Velayat-e Faqih regime needs to export crisis to survive, but the first victims of Khomeini and his followers are the Iranian people. Your efforts to confront this regime is legitimate and your struggle is for the liberation of the Iranian people with all its spectrum from Arabs, Kurds, Baluch, Azeri and Fars from the oppression of the Velayat-e Faqih.”

Ed Rendell, former Chairman of the U.S. Democratic Party and Governor of Pennsylvania, said that regime change is up to the people of Iran and their supporters across the world. He also said that it is the role of the United States to support these people. Joseph Lieberman, former U.S. Senator and Vice-Presidential candidate, emphasized that the Iranian people are already active and recently people were risking everything to hold Rajavi’s picture up in public in Iran.

Bernard Kouchner, former Foreign Minister of France, said: “Change in Iran will open the way to end extremism, the extremism born in the name of Islam throughout the region. This is not because Islam is a good ground for terrorism, instead they are using Islam as a tool for extremism and murder. So your role is not only necessary for change in Iran, but change Iran is certainly the beginning of a real change for democracy in the whole region.”

Former U.S. Homeland Security Secretary and Governor of Pennsylvania Tom Ridge praised the Resistance, describing it as “strong”, “inspirational”, “popular”, “organized” and “magnificently led”. John Bolton, former U.S. ambassador to the UN, reiterated that the Iranian regime is central to all problems in the Middle East.

Nasr al-Hariri, chairman of the Syrian opposition negotiating team, said: “Anyone who is serious in the war on terror should put his position on Tehran and overthrow of this fascist regime. This regime should be put under pressure at the international level and at the United Nations, condemning it for its war crimes and its crimes against humanity, and should be expelled from the Islamic Cooperation Organization.”

Judge Ted Poe, Member of the US Congress highlighted that Iran’s IRGC was behind all of the attacks on Camp Ashraf and Camp Liberty. He called on the IRGC to be listed as a terrorist entity.

Speaking about the weak position of the Iranian regime, Sir David Amess, Member of the British Parliament, stressed that it will get weaker because of the expanding activities of the Resistance.

Giulio Terzi, former Italian Foreign Minister, said: “European leaders and businesses are ill-advised rushing – at their own risk – to the Iranian market as if Rouhani were making of it a new El Dorado: too often their partners are linked to the IRGC. World leaders should look to the Iranian people, to the expatriate community: they should stand with them, support the Iranian Resistance, the freedom and human dignity the Iranians are striving for. The message to the mullah’s must be: It’s time for them to go.”

Twenty-nine former officials of the US declared their support for the Resistance on the eve of the event.

A statement of solidarity condemning the human rights abuses in Iran and calling for the designation of the IRGC as a terrorist entity was issued by 265 members of European Parliament.

Over 300 lawmakers from the Houses of Commons and Lords in the UK and 100 British Bishops issued a statement. They condemned the 1988 massacre of political prisoners and declared their support for sanctions against the IRGC.

A statement by 320 Italian parliamentarians condemned human rights violations and the 1988 massacre. They called for justice for the victims of the regime.

A hundred 100 Polish parliamentarians condemned human rights violations and the wave of executions in Iran in a statement.

Statements of support were also issued by the majority in the Parliament of Malta and a large number of lawmakers in the Romanian Parliament as well as by a number of Nobel laureates.