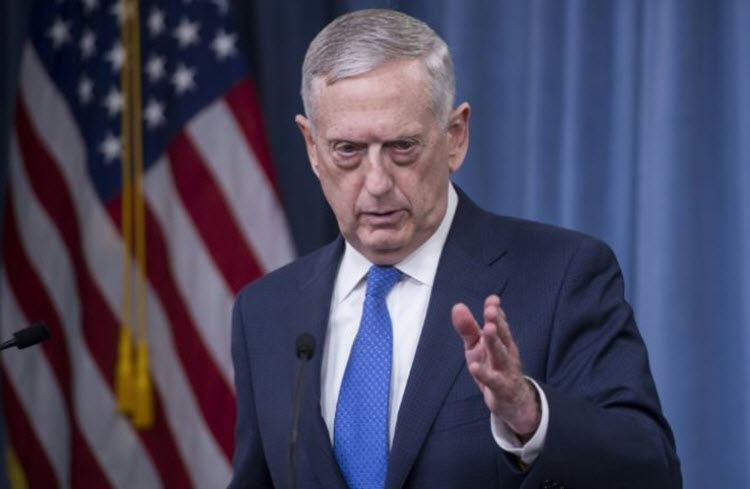 London, 12 Jul – The United States Secretary of Defense, James Mattis, has said that regime change in the Islamic Republic of Iran will be essential if the US and Iran are ever to have positive relations and interactions.

In an exclusive and rare interview with high schooler Teddy Fischer at Mercer Island High School, Mattis spoke about the hardships of the Iranian people and the lack of democracy in the country because of the ruling theocracy. He also emphasised that the overthrow of the regime will not be a simple task.

He said: “Until the Iranian people can get rid of this theocracy, these guys who think they can tell the people even which candidates they get a choice of. It’s going to be very, very difficult.”

Mattis pointed out the differences between a normal US election and that of Iran, highlighting that the Supreme Leader of the country really makes the decision.

He explained: “It’s the supreme leader [who] decides who gets to run in. It would be like having the current American president decide who gets to run in the next campaign, and by the way, when they come in he stays in the White House and the others just kind of rotate through.”

While he served as commander for the US Central Command Mattis was confronted with the Iran problem many times. He said that Iran was one of the most problematic issues he faced and said that he had no problems with confronting it in the past.

However, he pursued a strike in retaliation to Iran’s supply of rockets to Iraqi insurgents that were fighting US troops six years ago but he was ordered by President Obama not to carry out the plan.

Mattis highlights that the tide is turning and an overwhelming majority of leaders across the world consider Iran to be a serious problem that needs confronted. He said that without Iran, Syrian dictator Bashar al Assad would have been ousted. Also, the situation in Yemen is getting worse because of the regime’s involvement. The Houthis rebels there have got their hands on ballistic missiles thanks to Iran.

He said in no uncertain terms that Iran is “the most destabilizing influence in the Middle East”.

Reuters: Russia will agree to United Nations sanctions against...