“The Events of the ’80s and 88 Will Uproot the Regime,” Say Confidant of Iran’s Supreme Leader 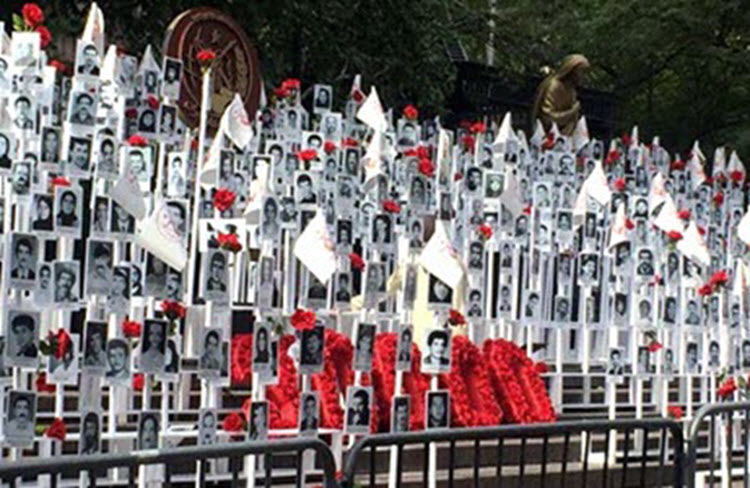 London, 29 Jul – During the summer of 1988 a fatwa was issued that resulted in massive executions within Iran’s prisons. Estimates place the number of victims at around 30,000, most of whom had affiliations with the People’s Mojahedin Organization of Iran (PMOI/MEK).

The proposed successor of Khomeini, Ayatollah Hossein Ali Montazeri, was dismissed and sentenced to house arrest because of his objections to this massacre. Last year, an audio tape was published by Montazeri’s son. On it, you can hear the late Ayatollah Montazeri addressing members of the committee of executioners (commonly known by Iranians as The Death Committee). He describes this massacre as the worst crime in the history of the Islamic Republic, and named Ibrahim Raisi, Mostafa Pour Mohammadi, Hossein Ali Nayeri and other coordinators as criminals.

Ali Fallahian, who was the minister of intelligence during the Rafsanjani government, said in a recent television interview, “The view of Mr. Montazeri, who disagreed with Imam (Khomeini), was that these executions will ultimately cause a “historical judgment” against us, a judgement against Islam, so it is to our benefit not to conduct these executions, but Imam said that you must perform your religious duty and don’t wait for the judgment of history.”

Thanks to the Iranian opposition, a call for justice was started last year, and families of the victims of the 1988 massacre are seeking justice for their loved ones. The mass executions were carried out in secret and the dead were buried in mass graves at night.

During the presidential elections a challenge for both of the regime’s factions was created by this call for justice. The divide between regime’s factions became so great that Khamenei was forced to comment in a recent speech that “no one should be allowed to change the place of martyr and henchman in relation to the executions of the 1980s.” He was referring to the fact that many of the heads of this government took part in the 1988 massacre, and the Iranian people are aware of this. He feared that this would create internal and international consequences that he sought to avoid.

State-run media also released Khamenei’s praises of the movie, “Nimrooz,” the production of which was funded by the Iran Revolutionary Guard Corps (IRGC). The movie demonized the opposition movement, People’s Mojahedin Organization of Iran (PMOI/MEK). The regime believed that the film would prevent another uprising similar to the one in 2009, in which the MEK played a pivotal role in organizing protests against the regime. Instead, after its release, former political prisoners and families of executed prisoners condemned the events showed in the film, and called it a distortion of the reality in history.

Additionally, the regime staged a tour of Evin Prison for an international delegation. Fifty ambassadors of different countries were welcomed to the prison on July 5th. Amnesty International called this tour a “crude PR Stunt” and gave a statement saying that Evin prison is known by the world as a symbol of wide political oppression in Iran.

The MEK sought safety in Iraq, first at Camp Ashraf, and later at Camp Liberty. Still, the MEK experienced a very difficult and dangerous situation, with several attacks over the last decade. MEK members have now been safely resettled in Europe, mostly in Albania.

Even under such dire circumstances, this movement has attracted public sympathy. The Iranians and the International communities are curious about this movement. The MEK is finding a fast-growing following among the youth of Iran, who want to know the truth about what happened in the 1980s. Even the children of regime officials seek the history of the movement and want to know what message it conveys for them. Sympathy for the victims of the 1988 massacre and their families has taken root in Iranian society.

Khamenei’s confidant, Rahimpour Azghadi, recently said, “The events of the ‘80s and 88 will uproot the regime, even if we have the largest missile in store.”

By Jubin Katiraie The US has said Iran will...