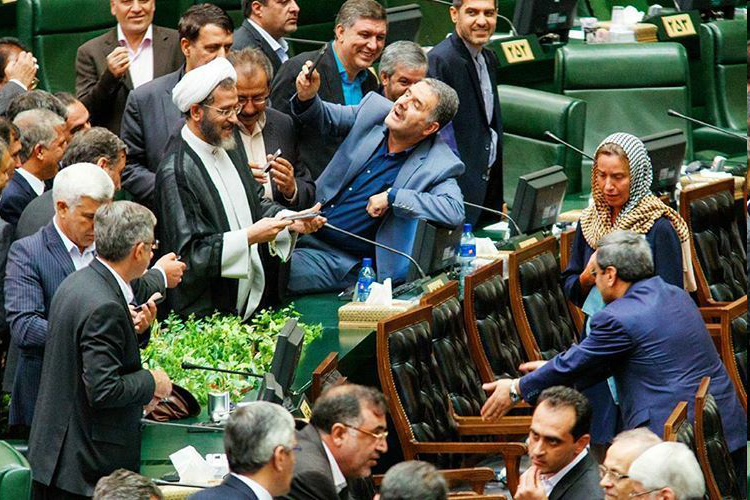 London, 7 Aug – Several Iranian politicians are facing a backlash from the Regime after rushing to taking selfies with a senior female EU diplomat at President Hassan Rouhani’s inauguration last week.
In photos of the event, Federica Mogherini, current High Representative of the European Union for Foreign Affairs and Security Policy, appears shocked at the men’s rush to take a picture with her.

The politicians have been scolded for behaving in a manner “unworthy of MPs” by the Regime’s Fars news agency, who hashtagged the photos as “selfie of shame” on their Twitter.

While Sadegh Kharrazi, a former Iranian diplomat, called for ethics training for politicians after seeing the photos.

It is strange that this behaviour is unworthy, but the actions of other Iranian politicians to imprison human rights activists, demonise other religions, and vilify the legitimate opposition are a-ok.

Fellow MPs have described Selfiegate as an inappropriate attempt to pacify the West, including Alireza Salimi who called the actions “self-surrender to the West” and warned of an inquiry into the men’s conduct.

However, someone should tell the Regime that nothing pacifies a woman less than a crowd of men surrounding her to take photos.

The men involved in Selfiegate have been roundly mocked on social media, with comparisons to the Seven Dwarves from Snow White, amongst the tweets found by The Telegraph.

MP Ahmad Mazani, who was one of the men pictured, explained that they had not been able to greet her during the parliamentary session and were eager to approach her afterwards.

However, women are not a common sight in the Iranian Parliament.

According to Human Rights Watch, only one woman has held a ministerial position in the Iranian government since the 1979 Islamic Revolution.

It is believed that many conservatives within the Parliament were shocked at their colleagues’ willingness to approach a foreign woman in a country, which is still so divided by gender.

Of course, it is this kind of almost fanatical behaviour by the Selfiegate MPs that fuels the notion that women should not work because they cause too much of a distraction for the men.

This leads to more women unable to take their place in the workforce, but specifically in this instance in the democratic process.

All in all, sexism has won out in the Iranian Regime.

Mogherini has released a statement on her trip to Iran but has not commented on the images.