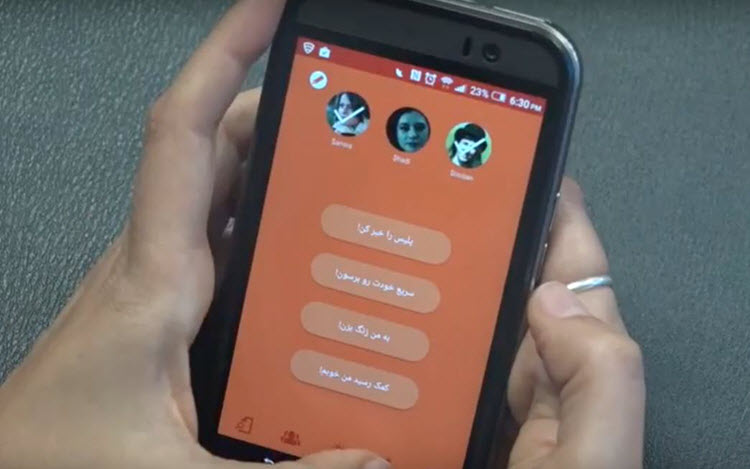 London, 9 Aug – Young people in Iran are using apps to fight oppression by the Regime; from a voting app which helps you decide which candidate is right for you to a period tracker which provides sex-ed to young women.

Firuzeh Mahmoudi, co-founder of United 4 Iran (U4I), a US-based non-profit that is working to advance civil liberties in Iran through technology, said that more Iranians than ever before are embracing the technical revolution and explained that many such apps are built by Iranians both at home and abroad.

Virginia Vigliar on “Motherboard” has explained four such apps which are helping the under-30s resist the Regime and fight for civil rights, in ways that traditional activism cannot.

The so-called morality police in Iran patrol the streets to identify and arrest people who are not abiding by the strict set of moral standards dreamed up by the Regime; for instance, being improperly veiled. The morality police target women much more than men.

The Gershad app takes information from its users to track the regular routes of the morality police so that Iranians can avoid them as much as possible.

Deciding who to vote for

In most countries, an independent body (generally funded by the election commission) will set up an app or a website in the run up to an election and allow you to answer questions on your beliefs and then match you with a candidate who has the same viewpoints.

Under the Iranian Regime, there would be no such thing because the idea is that you vote for who they tell you to.

However, the app Vote17 (Sandoogh96), created before the May elections, allows you to swipe left or right on statements like “I want internet blocks to be removed” or “LGBT people should have the same rights as everyone.” to find the politician most in line with your views.

Most period tracking apps are used to work out when you’re ovulating and estimate when your next period will be. HamDam goes a little further by providing users with important information about the reproductive and legal rights for Iranian women.

Project leader Soudeh Rad explained that the limited sex education that is available under the Iranian Regime is solely based on male pleasure and only available to young, straight, and about to be married people but she wants to change that.

She said: “Women’s sexuality is the subject of so much oppression around the world, which is connected to the struggle for the right to control our own bodies.”

This app provides information for women to protect themselves and their rights.

Over 60% of women in Iran will experience verbal, sexual, or psychological abuse and most will never report the incident to the authorities for fear of blame, more abuse, or even feelings of guilt.

The app Toranj, inspired by the American app Circle of 6, will alert a selection of trusted people to the user’s exact location and allow them to intervene if she is in a dangerous situation.

AP: Iran has taken its case against the United...

Iran to talk with Security Council members on nuclear deal