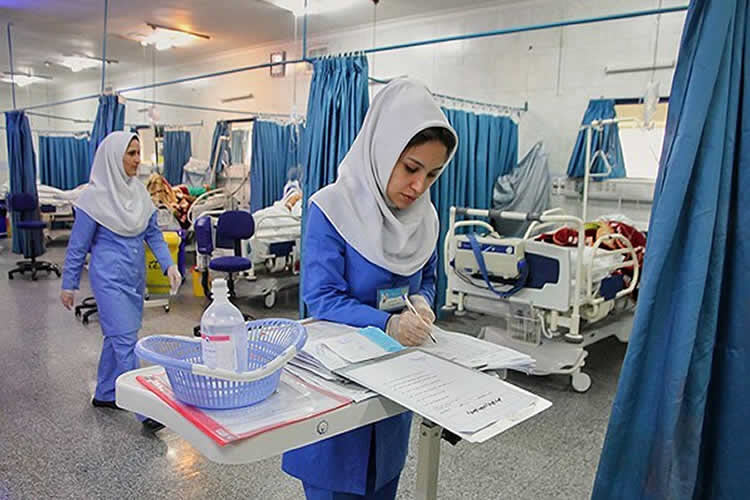 London, 29 Aug – In Iran, nurses do not have official employment, but instead work on temporary contracts. They are paid a small salary, but even this is not paid regularly.

On August 24th, 2017, nurses protested in Boushehr over non-payment of salaries, past due for eight months. On July 16th and 17th, 2017, nurses in Semnan staged protests outside the Governor’s Office to demand 11 months of past due salaries. On May 30, 2017, the nurses and staff of a hospital in Yasouj staged a protest demanding six months of non-paid salaries. Over this past year, similar protests have been staged across the country.

While nurses are forced to work overtime, their overtime fees are not being paid, acknowledged the Vice-President of the Nursing Organization. Meanwhile, regime officials admit that in the last year and a half, at least 16 nurses between 25 and 45 years of age have died at their workplace due to the stress of long working hours. In fact, five months previously, that same official announced that 10 nurses had died at work, meaning that in just five months, six nurses have died in their workplace.

Dr. Jaleh Ezzati, a vice-president of the Nursing Organization, admitted that there is a shortage of nurses in Iran. She said, “In Iran, every 15 patients have one nurse, while by the international standards every nurse has to attend to one or maximum of four patients.”

It is reported that there are at least 11,000 unemployed nurses in Iran. The President of the Nursing Organization admitted that 40,000 unemployed nurses are registered at the organization’s website, but they are unwilling to continue working without job security. There is an increasing absence of government support for nurses, who must endure a dreadful amount pressure at work, while receiving small salaries.

The number of nursing graduates is significant, but many do not get employment licenses after graduation. Many nurses decide to migrate, despite the shortage of nurses in their country.

Two years ago, the Ministry of Health announced a plan by which hospitals with sufficient facilities are allowed to train nurses. On May 13th, 2017, the ministry renewed the directive on this plan.

Activists in the nursing community call this the Health Ministry’s plan to take advantage of untrained, cheap labor forces to resolve the critical shortage of nurses in hospitals. They say that the plan will further jeopardize the job security of the thousands of nurses who are working under unofficial contracts, despite their years of experience.

Additionally, according to some experts, the Health Ministry’s plan will set the nursing profession back by at least 50 years.

On August 6, 2017, Iran’s nursing community staged nationwide protests against the Health Ministry’s plan. The protesters called for termination of the plan, and have stated that they will continue the protests until their demands are met.

The United Nations and the Commission on the Status of Women (CSW) have concentrated their 2017 agenda on elimination of discrimination against women — equal pay for equal work, closing the gap in the job market, and other related issues —as well, attention to the plight of women nurses in Iran is necessary.

U.S. accuses Iran over support for militias in Iraq

Reuters: The United States accused Iran after talks on...