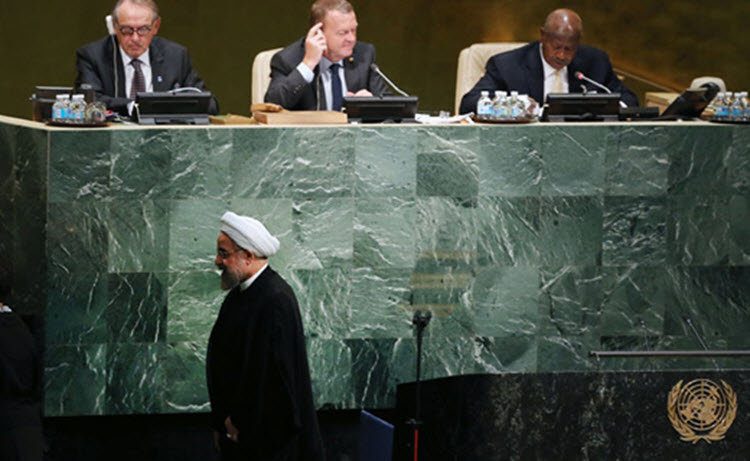 The United Nations General Assembly will gather later this week. In attendance will be President Hassan Rouhani of Iran.

Iran has been criticised countless times for its very poor human rights records. The Islamic Republic is one of the worst countries for human rights and the people are brutally suppressed by the torturous mullah regime that runs the country.

Many human rights organisations have slammed Iran for its executions and the poor treatment of the people, however the Iranian government dismisses any criticism as a conspiracy by the West to discredit the country.

Human rights violations are not a new development – it has been going on for decades, and the people of Iran are increasingly calling for justice for victims.

Last year, an audio recording of Hossein Ali Montazeri criticising senior officials for their role in the 1988 massacre in which 30,000 political prisoners were executed was made public. Montazeri was set to become the next Supreme Leader, but this ended when he spoke out against the massacre which he said would go down in history as one of the worst crimes.

The audio recording was released by his son last year and it provoked a huge and international call for justice for the victims of the crime against humanity. Some regime officials acknowledged the massacre, while others, shockingly, defended the crime.

Although the regime’s human rights violations are not a conspiracy by the West, the West is blinded by the title “moderate”. President Hassan Rouhani is labelled “moderate”, but he displays no signs that make him worthy of this adjective. During his first term in office, there were thousands of executions carried out in the country, and now during his second term, nothing has changed.

The West has said that there is hope for Iran now that its President is a moderate. But if the situation in the country has not changed since 2013, when he was first sworn in, what is the world waiting for? Why is this callous President being invited to the United Nations General Assembly?

Furthermore, Rouhani was well-established in the Iranian regime when the 1988 massacre was happening. Many of the participants in the massacre have held high positions in the regime since. For example, Mostafa Pourmohammadi was the Minister of Justice in Rouhani’s government during his first term. Pourmohammadi was one of the four members of the so-called “death commission” in Tehran. Surely it is Rouhani’s responsibility to carry out an investigation into the crime of 1988 – not give them places in his government.

Pourmohammadi was removed from his position and replaced with Alireza Avayi – another member of the “death commission” in a different area in the country. How ironic that the people responsible for justice were involved in one of the most horrific crimes of our time.

Faced with such absurdity, and desperate for justice for those that have been victim to the Iranian regime, many people will join in protest at Rouhani’s presence at the United Nations General Assembly.

Iran says oil over $100 a barrel is good

Reuters: Iran is happy with current oil prices above...

Reuters: Talks to revive a stalled plan for Iran...