At UNGA, Trump Dashes Iran’s Hopes Regarding US Policy and Nuclear Deal 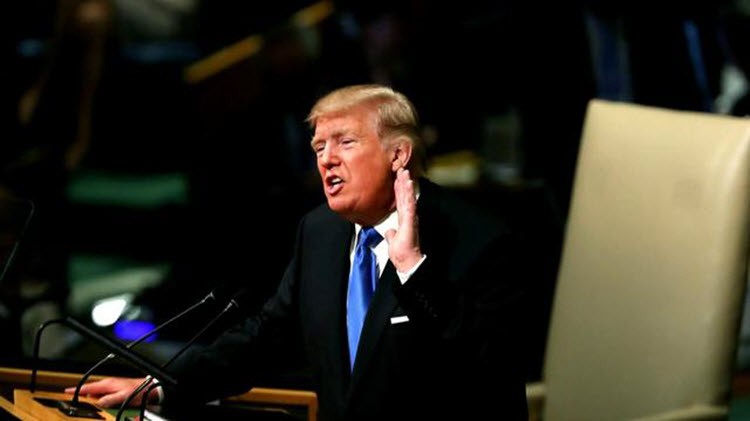 London, 22 Sep – As US President Trump is known for being an unpredictable political leader, the eyes of the world were on his first speech at the UN General Assembly, especially when he said, “We cannot abide by an agreement if it provides cover for eventual construction of a nuclear program.”

He spoke about such subjects such as the threats from North Korea, the refugee crisis, and Iran’s activities in the Middle East. In fact, he mentioned Iran 11 times during his speech, indicating that Tehran’s destabilizing actions in the region will be one of the most crucial issues for the US foreign policy.

But, Trump’s most vitriolic attack was on the nuclear agreement, formally known as the Join Comprehensive Plan of Action (JCPOA). He called it “an embarrassment to the United States” and “the worst and most one-sided transactions the United State has ever entered into”.

Iranian President Rouhani will speak at the General Assembly a day later. Proponents of the agreement hope to defend the nuclear deal.

For Iranian people, President Trump’s speech was encouraging, as he talked about change in the country. According to some, his words would have been punishable by death if uttered in Iran. He pointed out that “The longest suffering victims of Iran’s leaders are, in fact, its own people,” and criticized the Iranian government for using the country’s resources and oil revenues to support terrorism in the Middle East, instead of improving life for its people.

In remarks that seemed to speak directly to the Iranian people’s democratic aspirations, as President Trump said, “The entire world understands that the good people of Iran want change, and, other than the vast military power of the United States, that Iran’s people are what their leaders fear the most.”

“Oppressive regimes cannot endure forever, and the day will come when the people will face a choice,” he stated, and asked, “Will they continue down the path of poverty, bloodshed and terror, or will the Iranian people return to the nation’s proud roots as a centre of civilization, culture and wealth, where their people can be happy and prosperous once again?”

Still, nothing shows just how upset Trump’s remarks made Iranian officials better than the scowl by Tehran’s representative as he watched the speech.

AP: Iran denounced the United States on Monday for...

Reuters: At least a dozen U.S.-listed companies have been...