Trump: People of Iran Are the First Victims of Iranian Regime 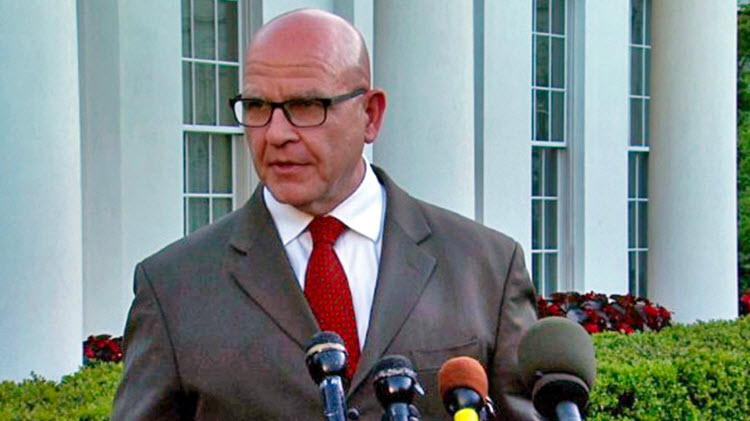 London, 22 Sep – On Thursday, H.R. McMaster, President Trump’s National Security Adviser, said that the administration is very concerned about Iran’s destabilising behaviour. He also said that the Iran nuclear deal is “fundamentally flawed” because it is so one-sided. Iran was the one that got all the benefits. Furthermore, the deal did not address fundamental issues leaving the regime free to advance with its nuclear program.

McMaster pointed out that there are various ways in which the US can deal with the Iranian regime and emphasised that Trump is looking at the full situation in the Islamic Republic rather than focusing on just the nuclear aspect.

He also said that Trump is ensuring that American interests are protected including American citizens and allies.

Earlier this week, Trump declared that he had made a decision on how to proceed with the Iran nuclear deal but we will have to wait for further details.

His Secretary of State Rex Tillerson also called on all allies of the United States to look at the broader picture when it comes to Iran. He said: “We also have been making the case to our allies that you share our concern about Iran’s behavior … We believe they’re now looking more carefully and seriously at that as a means to push back on this other behavior of Iran’s that they agree with us is just simply unacceptable.”

At the United Nations General Assembly, Trump told the leaders of the nations that had gathered there that the nuclear agreement cannot remain in place “if it provides cover for eventual construction of a nuclear program”.

His speech focused a fair bit on the Islamic Republic and he highlighted the many different threats that the country poses. It seems like US foreign policy will have a certain focus on the Iranian regime.

Trump said that the nuclear deal was horrifically “one-sided” and is an “embarrassment” to the United States.

The Iranian President Hassan Rouhani was probably hoping that the General Assembly would focus on the EU leaders who believe that the deal is adequate and should remain in place.

French President Emmanuel Macron said that the deal is “good” and slammed anyone, clearly referring to Trump, for suggesting that the deal should be dismantled. He did however admit that key issues were not addressed in the deal and suggested that he is prepared to act tougher when it comes to the Iranian regime.

Trump, in his speech, made it known that he is aware that the victims of the Iranian regime are first and foremost the people of Iran. He said: “The longest suffering victims of Iran’s leaders are, in fact, its own people. The entire world understands that the good people of Iran want change, and, other than the vast military power of the United States, that Iran’s people are what their leaders fear the most.”

“Oppressive regimes cannot endure forever, and the day will come when the people will face a choice. Will they continue down the path of poverty, bloodshed and terror, or will the Iranian people return to the nation’s proud roots as a centre of civilization, culture and wealth, where their people can be happy and prosperous once again?”

India to be prepared for all eventualities over Iran oil – minister

Reuters: India needs to be prepared for all eventualities...