Iran Earthquake Sees More Than 540 Dead: What Is Regime Doing? 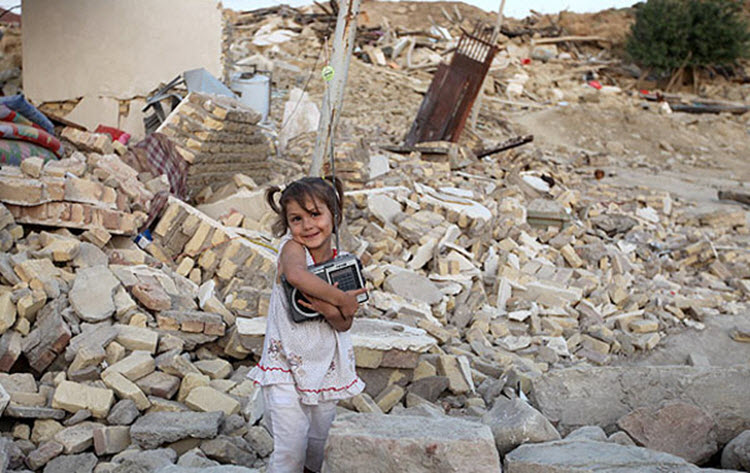 London, 14 Nov – Thousands of Iranians have been forced to spend a second night exposed to the elements following the earthquake that killed over 540.

On Sunday, the 7.3-magnitude quake struck at the Iran-Iraq border, in a mountainous region spanning Iran’s Kermanshah province and Iraqi Kurdistan, causing many occupants to flee their homes.

However, humanitarian aid has since struggled to get to the quake zone, leaving many without the most basic of necessities including water, food, medicine, and shelter.

Officials said that they were setting up relief camps and had already distributed 22,000 tents, 52,000 blankets and tons of food and water, and Iran’s state-run IRNA news agency said 30 Red Crescent teams had arrived in the region.

The roads to Kermanshah province were reopened by late Monday, according to Iranian officials, but according to state-run television the worst-affected town, Sar-e Pol-e Zahab, was still without electricity. 280 people- over half of the dead were in that town.

Several villages across this impoverished region of Iran have been totally destroyed according to the Tasnim news agency but the ISNA agency instead chose to report of the minor damage to historical monuments in Kermanshah.

Many foreign media outlets are also being prevented from visiting the area, although it is not clear why as state-run Iranian media has been there.

It is possible that the Iranian Regime is actively blocking the necessary care, according to the Iranian Resistance group, the People’s Mojahedin Organization of Iran (PMOI).

Citing past earthquakes, they said: “The international community and the Gulf States provided Iran with hundreds of millions of dollars in aid and dispatched dozens of relief teams. Reports, however, indicated Iran’s state forces plundering much of the aid, and dispatching thousands of boots to the area to prevent any possible protest.”

On Sunday, Nizar Abdullah, a 34-year-old Iraqi Kurd, was sifting through the ruins of her next-door neighbours two-story home looking for survivors until rescue workers arrived. Some family members were able to escape, but of the eight people inside, the mother and one child were pulled dead from the rubble.

The earthquake has particularly affected the poor, as many older buildings were completely destroyed while newer ones remained intact.

Tuesday, November 14, was declared a national day of mourning in Iran, with 413 dead and 6,700 injured. The aftershocks of the quake were felt as far as southeastern Turkey.

The area of western Iran and northeastern Iraq sees frequent seismic activity as it lies along a 1,500-kilometer fault line between the Arabian and Eurasian tectonic plates. In 1990, 2003, 2005, and 2012, the area experienced major quake disasters killing some 72,000 people in total.

AP: Iran has condemned a ruling issued by a...