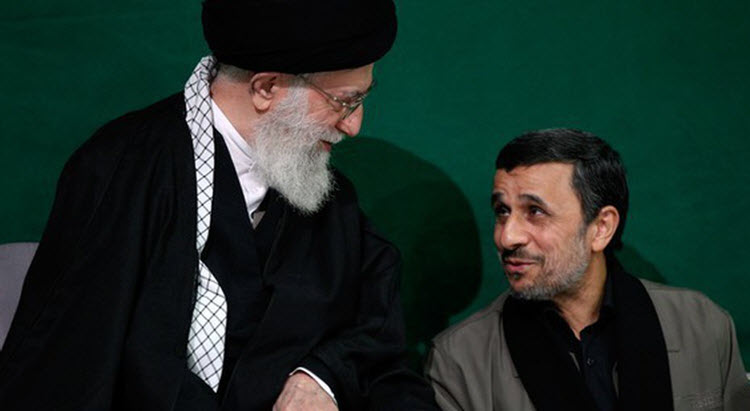 London, 1 Dec – It appears that toward the end of former president Ahmadinejad’s first term in April 2009, his relationship with Supreme Leader Ali Khamenei began to sour, after period of good relations that had defined their alliance up to that point.

When the first Minister of Intelligence, Mohammad Reyshahri, objected to Ahmadinejad’s government separating the Hajj and Pilgrimage Organization from the Ministry of Culture and Islamic Guidance, Khamenei told Ahmadinejad to reverse the decision. Ahmadinejad disregarded the Supreme Leader’s objections, and forced Khamenei to make them public.

Again Khamenei was not pleased, when during the televised debate between Ahmadinejad and the reformist presidential candidate Mir Hossein Mousavi on June 3rd, 2009, Ahmadinejad unexpectedly attacked not only his direct rival, but also Rafsanjani and Ali Akbar Nategh Nouri, the former speaker of the parliament, and accused them both of corruption.

Khamenei defended Rafsanjani and Nouri in his Friday Prayers sermon, and said that he had warned Ahmadinejad that his attacks weren’t welcome. He said that he fully expected the president to heed his warning.

Esfandiar Rahim Mashaei was unpopular with the ruling clergy because of his unorthodox religious views. In summer 2009, Ahmadinejad appointed him as his first vice president. In doing so, once again, he went against the wishes of the Supreme Leader, and forced the Supreme Leader to publicly veto the appointment.

Subsequently, Ahmadinejad confined himself to his home for 11 days and refused to attend cabinet sessions, public meetings, or religious ceremonies.

Ahmadinejad faced condemnation from across the conservative political spectrum, and some parliamentarians called for his impeachment. Friday Prayers’ diatribes from Ahmad Jannati severed the last vestiges of friendship between the two.

On February 3, 2013, during the last months of his presidency, Ahmadinejad presented a video to the Iranian parliament that appeared to show Fazel Larijani, one of the Larijani brothers, procuring bribes. Khamenei advised Judiciary Chief Sadegh Larijani to remain silent on the matter. A few days later, he himself strongly and publicly condemned Ahmadinejad’s action, calling it “illegal and against sharia” — a condemnation that angered Ahmadinejad’s supporters.

Ahmadinejad has paid little attention to the Supreme Leader and, as recently as a week ago, has continued to criticize the family.

In what may seem like a contradictory move, the Supreme Leader appointed Ahmadinejad to the Expediency Council immediately after the end of his second term in August 2013. He reappointed him to the council in 2017, and he regularly invites him to meetings and ceremonies at his office. Khamenei voices support for some of the policies from the Ahmadinejad government. He appears to be unwilling to let the split between the two become public and irreversible.

Is there is something else that has an impact on the Khamenei-Ahmadinejad relationship? According to former Judiciary Chief Mohammad Yazdi, Khamene tolerated the last two years of Ahmadinejad’s presidency because he had no other choice. Fourteen years ago, the Supreme Leader arranged for Ahmadinejad’s political ascendance, a decision that could affect his credibility.

Another important consideration is that Ahmadinejad’s supporters have remained loyal. “The social base of individuals is very important for the Supreme Leader,” wrote a principlist commentator on November 25th. “Many of his supporters still see Ahmadinejad as their savior angel. He cannot be removed from the scene overnight and by a political decree… [The people] need time to see him as he really is. [As time goes by] he will be removed. This cannot happen by physical force.”

Ahmadinejad’s recent all-out attacks on the Larijani brothers are aimed at keeping Parliament Speaker Ali Larijani from becoming president, or Judiciary Chief Sadegh Larijani from succeeding Ayatollah Khamenei as the Supreme Leader. With his disclosures about the judiciary, he seeks to preserve his bonds with his core supporters.

Still, Ahmadinejad’s behavior may reach a point where the only option left for Khamenei will be to put Ahmadinejad under house arrest.