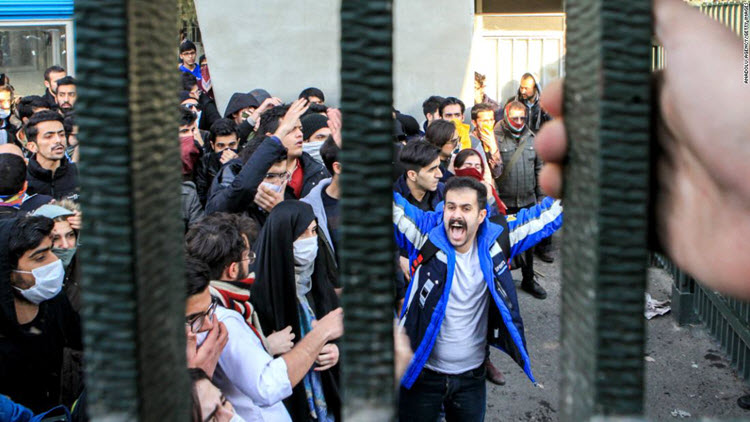 London, 2 Jan – At least 30 people have now been killed in clashes between the Iranian people and the security forces as anti-Regime protests continue to grow.

The death toll stood at 12 on January 1, and before that the Iranian Regime had only confirmed four deaths. This number has risen dramatically after tens of thousands of people joined the protests, which began last week.

Two protesters were shot dead by security forces on Sunday night, adding to the two killed on Saturday. Hundreds have been arrested for taking part in the demonstrations.

In the first state-media news report of a fatality, a police officer was shot dead and three others wounded. The date of this incident was not given.

Saeed Montazer al-Mahdi, a police spokesman, said: “A rioter took advantage of the situation in the city of Najaf Abad and fired shots at police forces with a hunting rifle. As a result, three were wounded, and one was martyred.”

However it would not be unusual for the Iranian Regime to hide its role in the violence and downplay civilian casualties.

Iranian Regime-affiliated news agencies report that the protesters are armed and are trying to take over police stations, security facilities, and military bases but this could not be independently corroborated.

The report read: “Some armed protesters tried to take over some police stations and military bases but faced serious resistance from security forces.”

Rouhani said: “The government will show no tolerance for those who damage public properties, violate public order and create unrest in the society. People are absolutely free to criticise the government and protest but their protests should be in such a way as to improve the situation in the country and their life. Criticism is different from violence and damaging public properties.”

It is worth noting that the Regime thinks nothing of destroying private property and people on a daily basis, so why should anyone care about the alleged destruction of public property?

The Iranian people who were originally protesting widespread corruption in the Regime, rising food prices, economic difficulties, are now calling for the country’s unelected ruler, Ayatollah Ali Khamenei, to resign.

They used social media to publicise many of the demonstrations and call for a free Iran (including videos featuring demonstrators chanting: “Mullahs, have some shame, leave the country alone”), and the mullahs have cut off access to Instagram and the messaging app Telegram, so that the protesters’ message cannot be heard outside Iran.