A Look at the Real Stories Behind Iran’s Protests 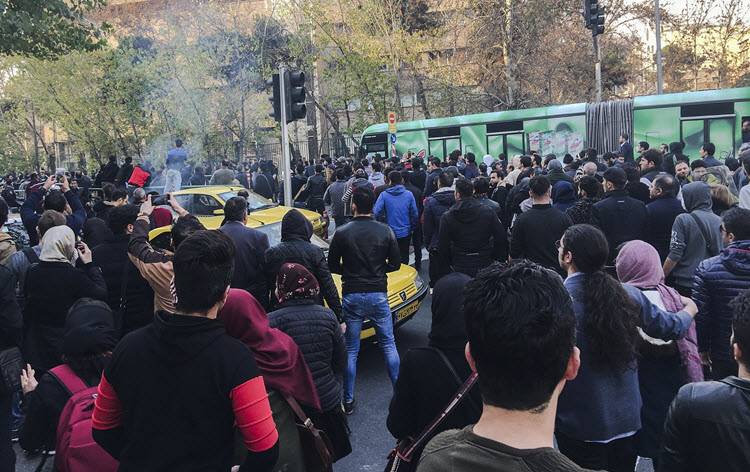 London, 5 Jan – As deep-seated unrest among the citizens risks Iran becoming the next Syria, let’s take a look at how those on the ground have been affected by the disastrous decisions of the Iranian government.

These protests initially began because of a sharp increase in the cost of living, but soon turned into a wide-ranging demonstration against everything that this wrong with the Regime.

Mohsen, 20, a protester in Karaj, expressed despair at the state of the economy- which has been horrendously mismanaged- and the high unemployment rates.

He said: “I’m in university now, but I know it’s a waste of time. I won’t have a job after this. I wouldn’t have a job if I didn’t go to university. I’m just waiting out four years. But there’s no future for me. . . for any of us.”

His older brother Ali, 25, is an unemployed mechanical engineer and Mohsen fears that if Ali can’t get a job, then he won’t be able to either.

He said: “Ali is much smarter than me, and if he can’t get a job, then I definitely can’t. That’s why I’m protesting. What future do I have to live for?”

This is an incredibly troubling situation, especially when you consider that their family is living month-to-month because everything is so expensive. Mohsen is thankful that at least they don’t have rent to pay, as his father, Hossein, a veteran, bought the three-bedroom apartment that they live in back in the 1990s.

Hossein took part in the 2009 Green Movement protests with Ali. He noted that Mohsen had never shown any political inclinations before now.

Mohsen’s mother, Fatemeh, is worried about her son’s safety at the protests- at least 21 have been killed and 450 arrested so far.

She said: “Mohsen and my nephew, Meysam, go to the protests every evening. As a mother I’m worried about them and don’t want them going. But I know they are frustrated. Things have to change. But I don’t want my son and nephew to pay a price for it when the government cracks down.”

Another person concerned about the economy is a thirty-five-year-old dentist, Ahmad, who is not quite ready join the protests.

He said: “I work at a dental clinic where a lot of our patients are working-class folks. Today I talked with all of my patients about the protests. Some of the families really rely on the cash transfers (yaraneh) the state has given them, and they’re worried Rouhani will take the cash transfers away. The cash transfers aren’t much anymore with the inflation. But still, how will they make ends meet? I feel the weight of the high food prices, and I’m a dentist who drives around in an expensive SUV and owns an apartment. I cannot fathom how my patients live with the prices of everything being so expensive.”

Indeed, inflation in Iran is now at 17%. This situation has only been made worse by corrupt politicians and businessmen who have embezzled millions of dollars, including the scandal of convincing Iranian’s to deposit their life savings into worthless investments.

The economy is not the only issue though; many protesters are demanding the release of political prisoners, the overthrow of the supreme leader, or even the downfall of the entire regime.

In an attempt to quell the protests, the Iranian Regime slowed down or even blocked the internet in order to disrupt communication amongst the protesters and to the outside world. State media, which is mainly controlled by the Khamenei faction, have featured the protests but in a heavily sanitised form to paint President Hassan Rouhani as the only problem rather than acknowledging the hatred for the Regime as a whole.

They have also doctored photos from previous protests- including the 2011 Arab Spring protests in Egypt- and blaming foreign governments for instigating the protests to mislead people about the nature of the protests.

Accusing foreign governments of interfering in their domestic affairs is pretty rich from the Iranian Regime but again, it misses the point. The Iranian people are protesting for themselves- not on behalf of anyone else.

U.S. speeds up bomb delivery for the Israelis

New York Times: The Bush administration is rushing a...