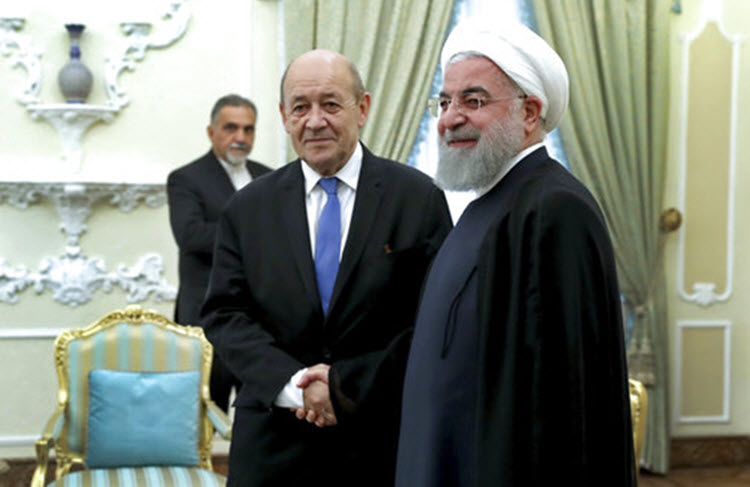 In response to Iranian claims that their ballistic missile program is peaceful, Le Drian said: “Having such tools is not uniquely defensive, given the distance they can reach.”

The French Foreign Ministry even issued a statement ahead of the trip, which said Le Drian would pursue “a frank and demanding dialogue with Iran”.

Iran has dismissed Le Drian’s legitimate concerns, with Gen. Masoud Jazayeri, a spokesman for Iran’s armed forces, saying that foreigners had no right to express a view on Iran’s defence.

However, recent evidence from the United Nations, which confirms what Saudi Arabia and the US had already said, shows that Iran has been allowing these ‘peaceful’ weapons to fall into the hand of the Iran-backed Houthis in Yemen who fired a series of missiles at Saudi Arabia, in violation of two UN resolutions.

Macron also wants an accord to limit Iran’s regional meddling, including their warfare on behalf of the Bashar Assad in Syria, where many Iranian proxy groups are fighting.

This one-day trip is also seen as evidence of the balancing act that France and other European nations find themselves in, following Donald Trump’s promise to withdraw the US from the 2015 Iranian nuclear deal if major flaws aren’t fixed.

Despite French leaders’ criticism over the missile program, French companies, including oil giant Total SA, have entered into deals with Iranian companies. This complicates France’s ability to advocate for sanctions on Iran, but it is important for France to remember that the majority of the Iranian economy is controlled by the Iranian Revolutionary Guards, a paramilitary force that answers only to Supreme Leader Ayatollah Ali Khamenei, and so any additional investments are likely funding terrorism and human rights violations.

France and Le Drian should continue to press for restrictions on Iran’s ballistic missile program and its regional meddling. They should not bow down to Iran’s demands.

AP: The head of the U.N.'s nuclear watchdog warned...