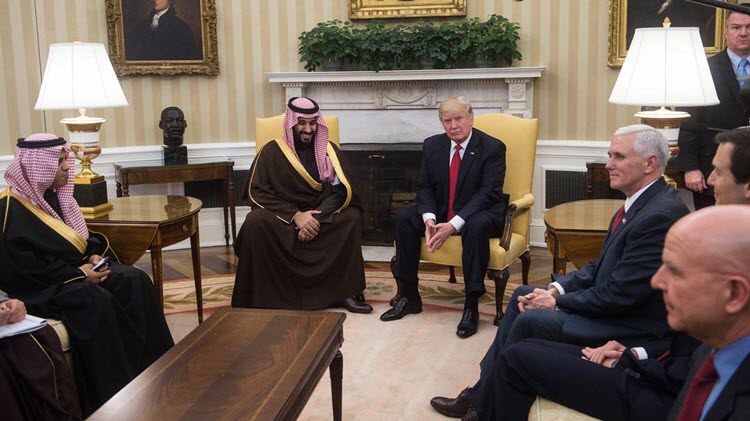 London, 20 Mar – During his visit to the United States on 20th March, it is expected that the Crown Prince of Saudi Arabia, Muhammad bin Salman, will discuss the shortcomings of the Iran nuclear deal with US President Donald Trump. It is also expected that the two leaders will attempt to come up with plans to deal with Iran’s meddling in the conflicts in the region.

The relations between Saudi Arabia and the United States have been very warm and amicable since Trump took office. His first foreign trip was to Saudi Arabia – a very telling sign that he wanted the kingdom to feel more valued than it did when Obama was in office.

Both nations have been very critical of Iran and they have made it a priority to work together to counter Iran’s destabilisation across the Middle East.

Saudi Arabia has been calling for tougher and decisive actions to counter the Iran threat for a long time. The Obama administration pursued policies of appeasement that leaders across the world criticised. Obama hoped that the appeasement and the over-generous terms of the nuclear deal would soften Iran’s behaviour, but many warned that it wouldn’t. And they were right.

Earlier this week, the Saudi Foreign Minister said: “Our view of the nuclear deal is that it’s a flawed agreement. We’ve called for tougher policies towards Iran for years. We’re looking at ways in which we can push back against Iran’s nefarious activities in the region.”

Al-Jubeir mentioned Iran’s interference in Syria in particular and said that Iran’s support of its president Bashar al Assad is making the conflict drag on. He also pointed to Iran’s links with the Houthi rebels in Yemen that Iran is supporting.

He said that Iran is spreading darkness across the Middle East, but also said that light will always “triumph” over it.

Iran has not responded to the Foreign Minister’s comments, but is has vehemently denied that it is meddling in other nations. This is despite the mounds of evidence that suggest otherwise.
Trump warned that he would pull the United States out of the deal if Europe did not fix the numerous flaws that make it a weak agreement. Iran is completely against the idea of amending the nuclear deal and has threatened to pull out of it if the United States scraps it.

Trump, and other leaders and officials, want Iran’s ballistic missile program to be addressed under the scope of the deal. Iran refused to let Obama address it during the negotiations, but the reality is that Iran’s missiles are capable of carrying a nuclear warhead so the issue certainly is relevant.

This visit to the White House will be the Prince’s first trip to the United States since becoming the Saudi heir apparent. He was formerly the kingdom’s defence minister and has been hostile with Iran during previous statements.

Iranian President Ebrahim Raisi in a conference on the...

AFP: Iran has carried out secret tests of missiles...