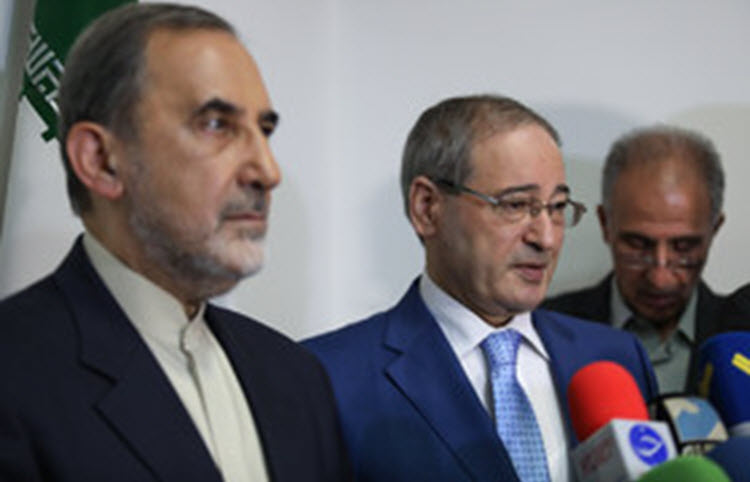 London, 07 Apr – Iran’s Adviser for International Affairs, Ali Akbar Velayati, has rejected a discussion of ballistic missiles and Tehran’s regional role with the West, calling it “an Iranian internal affair.” Velayati added, “There is no doubt that the Islamic Republic of Iran never seeks anyone’s permission in its defensive sector.”

After a meeting with Faisal Mekdad, the Syrian Deputy Foreign Minister, Velayti defended Iran’s policy in the region, saying Tehran continues its support and active presence in the region, indicating that it will support allies.

Regarding US President Trump’s decision not to withdraw troops from Syria, he said, “The United States and its allies have been trying for seven years to take over the legitimate rule of Syria.” Now that Iran is nearing the end of the period determined by the EU in which it must negotiate its regional role and ballistic missiles policy as a condition to renew the nuclear agreement, Velayati played down the importance of the US president’s demands, saying allegations made by Trump lack concrete logic.

Iranian President Hassan Rouhani stressed that Iran is committed to its obligations of the Joint Comprehensive Plan of Action (JCPOA) during his meeting with Russian President Putin in Ankara, Turkey. He said, “If one day something that deprives us from the benefits of the JCPOA happens, we will take a new decision.”

According to Putin,“all parties” living up to their commitments in this agreement is essential, and the international community must support JCPOA’s stability. He said that “undermining it in any way undermines diplomacy in the region and the world.”

Putin’s reference to “all parties” includes Iran. No doubt, the rest of the world does not see Iran’s intervention in the affairs of neighboring countries, exporting terrorism and Islamic extremism, its behavior in Iraq and Syria, and its supplying missiles, money, and support to Houthi rebels as “internal affairs”, but instead as threats to the stability of the region.

Ali Akbar Salehi, Head of the Atomic Energy Organization of Iran (AEOI) was quoted by Mehr news agency as saying on Thursday, “Enemies should know that in case of a JCPOA rollback, even though we are never looking for such a situation, special conditions will arise, and when the high ranking officials decide, there will be a special surprise for those who scuttle the agreement.” Salehi forewarned that Iran seeks to preserve its national interests and sovereignty, but if other major powers withdraw from this agreement, Tehran will act differently.

When Salehi met with AEOI staff for Nowruz, he linked overcoming this difficult stage with “national reconciliation, harmony and unity,” regardless of disagreements.

In August of 2017, Salehi said that although his country prefers not to, it will go back to enriching uranium by 20 percent at the Fordow Plant. In the event of a US exit from the nuclear deal, Salehi indicated that AEOI’s duty is to prepare to resume this work. He also stated that the organization is working to establish two new nuclear reactors in Bushehr, south of the country.

He also pointed out that his country is facing a “challenging year” at the international level, and expressed Iran’s concerns about the expected US-North Korean negotiations over the nuclear issue. “The negotiations between the two countries are vague and complex, but their results require our country to be more vigilant in its work and in making crucial decisions,” Salehi concluded.

International Herald Tribune - Maryam Rajavi: How should the...