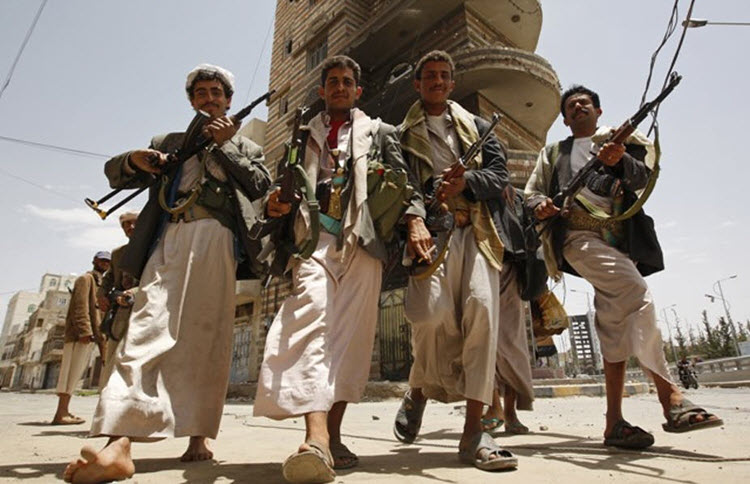 London, 09 Apr – Iran relies on three militias to export its Islamic revolution across the Middle East: Hezbollah in Lebanon, Hamas in Gaza, and the Houthis in Yemen.

Of these terrorist groups, Hezbollah is undoubtedly the strongest and most successful. It controls a section of the Lebanese Parliament and has other Hezbollah factions around the world. This is due, in large part to the astronomical amount of funding they receive from Iran – billions of dollars every year. Another factor is that former Lebanese prime minister Rafiq Hariri approved the disarming of all factions after the civil war, except for Hezbollah, who then had complete control over Lebanese territory.

Hamas is the second strongest, sharing Iran’s ultimate goal of destroying Israel, and paving the way for Iran to expand to the Mediterranean.

The weakest by far, is the Houthis, who ousted the legitimate Yemeni government in 2014. Less than 10% of Yemen are aligned with the Houthis, which means that they have almost no support from the Yemeni people and practically no influence in South Yemen.

The Yemeni Civil War has been raging for three years now and there is talk of forming a new government with the Houthis taking some power, as Hezbollah did in Lebanon. That is a terrible plan, which Saudi writer Mohammed Al Shaikh discredited on Al Arabiya.

He wrote that although Saudi Arabia does not reject a political solution, they oppose any solution that would resemble that reached by Lebanon as that would give the Iran-backed terrorist group legitimacy, which is especially worrying considering Yemen’s border with Saudi Arabia.

He advises instead that the Houthis should hand over their weapons to the unpoliticized Yemeni army, as this force represents all the people in Yemen as opposed to a small fraction. However, Iran rejects this, meaning that the Houthis do as well.

This obstructs any political solution to the civil war because there is no way that the Saudi-led Arab coalition to restore the legitimate government will accept a power-sharing government with the armed Houthis.

He wrote: “Saudi Arabia and the coalition states do not mind forming a consensus government in which the Houthis are represented as a political movement and not as a military militia… Here lies the complex that will eventually require the coalition countries to impose their perspective of a political solution with the force of arms. This is the only option.”

Reuters: An explosion on a pipeline transferring natural gas...