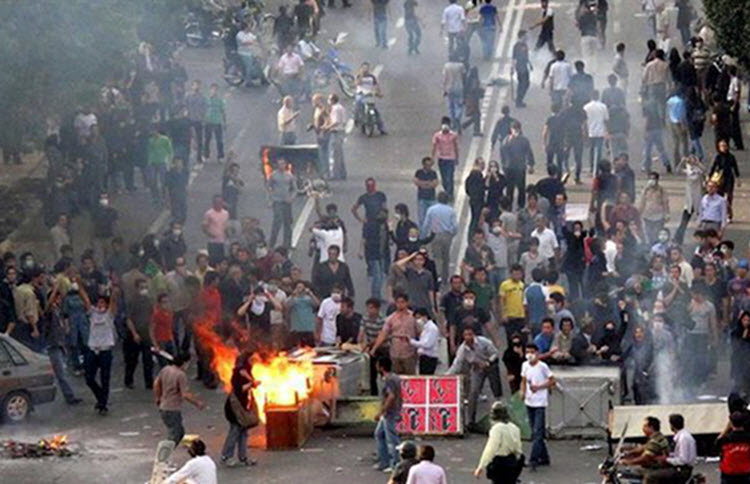 London, 26 Jun – The steep drop in the value of the rial led to massive protests in Tehran on Sunday and Monday. Protesters took to the streets, shutting down many shops in Tehran’s Grand Bazaar, to bring attention to the country’s failing economy.

The value of the rial has plummeted over the past year, and it has been in a free fall since last week. A U.S. dollar was being offered for as much as 87,000 rials on Sunday, compared to 75,500 last Thursday.

“Iranians are fed up with the ruling system and both its factions,” said Saeed Ghasseminejad, an Iran research fellow at the Foundation for Defense of Democracies in an interview with The Washington Free Beacon. “Over the last year, dollar appreciated 140 percent against rial. The government is selling oil to fund terrorist groups and its military adventures in the region while Iranians become poorer and poorer every day.”

The price of food has risen dramatically, causing many Iranians to stockpile staples, fearing that prices will rise further.

While prices have skyrocketed for the people of Iran, the Mullahs’ mafia bands add to the problem by buying currency at the government’s rate and reselling it for double the price. This further devalues the currency, making it even more difficult for the Iranian people to pay for food and essential items and adding to their anger. The government has done little to address the problems. Their attempts to “control the currency rate” have failed miserably.

Protests began on Sunday when a number of merchants closed their shops and went on strike to protest the plummeting currency rate. Rage boiled over on Monday night when a large group of protesters, mostly middle-class merchants and supporters, gathered at the Grand Bazaar in the center of Tehran and shut down many of the shops there. According to the MEK network inside Iran, people chanted,

“We are all together!”

“Let go of Syria, think about us!”

Security forces attacked the protesters with tear gas, but the protesters continued to march, with some even gathering on the steps of Parliament. The government denied the existence of the protest, but some Iranians, including some MEK network members inside Iran, were able to capture video of the protesters.

Though the protests seemed to originate with economic concerns, like so many of the recent protests Iran, it soon turned to larger concerns about the political climate and calls for regime change. Video taken by the MEK network within Iran captured protesters chanting, “Death to the dictator!”

The Iranian people face worsening economic, political, and human rights conditions. The corrupt ruling system is beyond reform, and it is weakening in the face of international pressure and a widespread uprising among its people. The time for an alternative is now. On June 30th, the supporters of the Iranian opposition will gather in Paris to discuss an alternative to the clerical rule. A free and democratic system is on the horizon. More information may be found here.

Iran threatens to create disturbances for U.S. and EU