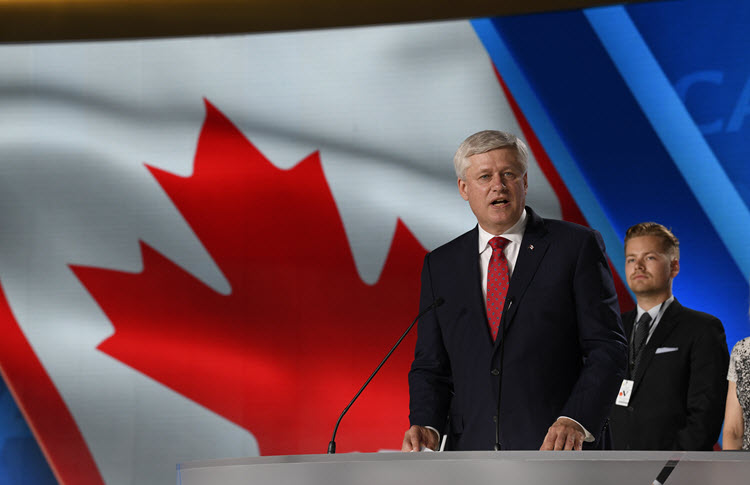 Harper’s speech was focused on how Canada has opposed, amd will continue to oppose, the Iranian regime and its history of human rights atrocities and terrorist actions.

Harper then took a moment to thank the people of Iran and the resistance movement for their long fight for freedom.

Harper went on to describe Iran’s current government, a “regime of cruel and tyrannical mullahs that stand for everything that is wrong not just in the region but in the world.”

Harper had further words of condemnation for the regime:

Harper listed a number of actions Canada has taken against the Iranian regime, including sponsoring actions against human rights abuses perpetrated by the mullahs’ regime, imposing sanctions, listing Iran as a state sponsor of terror, closing the Canadian embassy in Tehran, among other measures.

Harper stated that the regime is known for saying one thing and then doing another. The regime’s words cannot be trusted, so it must be judged on its actions.

In Iran, said Harper, women are treated as property. Religious minorities are persecuted.

The Iranian regime exports terrorism throughout the Middle East. It builds missiles, and it uses those missiles to build nuclear weapon, Harper stated.

Harper said that many countries have chosen to deny or ignore Iran’s determination to build and use nuclear weapons. These countries continue to make deals with Iran, and the regime continues its nuclear program unabated.

Harper closed his speech by saying that Canada will not ignore Iran’s nuclear aspirations.

About not ignoring Iran’s nuclear aspirations. “We choose not the easy way, but the right way.”