Student Crackdown by Iran Draws Criticism From Professors and Students 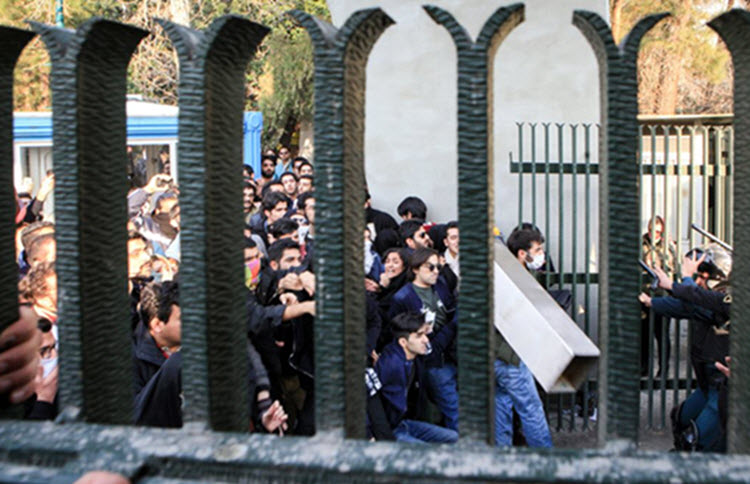 London, 18 July – The recent crackdown on Iranian students has been heavily criticised by university professors and others who are calling on President Hassan Rouhani, who they believe is responsible for the pressure, to take action.

More than 100 university professors have signed an open letter to Rouhani criticizing the arrests and pointing out that it seems like the government is “trying to silence dissenting voices in the universities”.

The letter read: “It seems that most of the detainees are individuals involved in legal activities, and perhaps some had criticized your government’s work on campuses. We want you to act upon your promises to defend the rights of the people, support a [safe] space for students for criticism, and protect [them].”

It called for universities in Iran to be secure, but not “securitized”.

Over 100 students were detained during the nationwide protests that began in late December over a draft budget and quickly grew into an anti-government uprising where people called for the death of Supreme Leader Ali Khamenei. Many of those arrested never actually took part in the protests, which spread to 142 cities, and were rounded up because the mullahs considered them likely to protest.

According to Iranian media and rights activists, two detained students, Sina Darvish Omran and Ali Mozaffari, were sentenced to eight years in prison each on national security charges – something that the government often levies against political prisoners – and a two-year ban from political activities and social-media usage. They were arrested by the Intelligence Ministry in December and held in solitary confinement.

At least three other students have been sentenced to between six months and one year in prison and have been banned from leaving the country afterwards.

Earlier in July, over 60 university groups in Iran condemned this pressure on students in a joint statement. They called for the release of all arrested students, an end to the bogus trials against them, and clarification of the role of the Intelligence Ministry.

Their statement read: “Not only does the ‘moderate’ government of Hassan Rouhani not react to the arrests, but the footprint of its Intelligence Ministry is seen in the arrests and the sentences.”

While students at several Iranian universities have launched several protests in recent weeks against the pressure that is being placed on them. In late June, the students at Tabriz University of Medical Sciences were filmed signing a protest song, wearing gags to demonstrate government’s silencing attempts, and holding protest signs, one that read: “Students don’t belong in jail”.

Reuters: NATO urged Russia on Friday to help other...