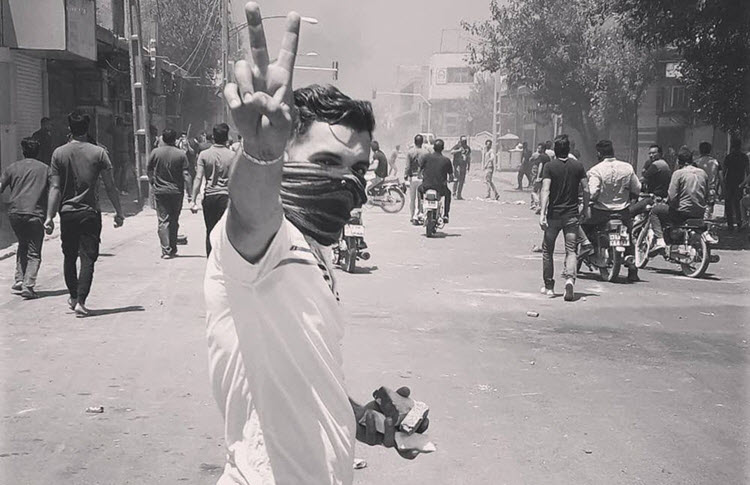 London, 4 August – Fresh protests broke out across Iran on Thursday in response to the failing economy, the drastic devaluation of the rial, and yet more economic problems ahead of returning US sanctions.

About 100 people took to the streets in Sari, northern Iran, according to Iran’s state-run IRNA news agency, as well as unspecified numbers in the cities of Shiraz, Ahvaz and Mashhad. IRNA reported that these protests were broken up by police.

This follows on from protests on Tuesday and Wednesday, when 200 people took part in a protest in Karaj, west of Tehran. Videos posted on social media, which were said to be filmed in Gohardasht, a suburb of Karaj, showed protesters shouting “Death to the dictator” as they set fire to police vehicles. The police were seen spraying the protesters with tear gas.

The Iranian rial reached records lows on Wednesday, with the global exchange rate reaching over 120,000 rial to the US dollar, possibly due to growing fear about US sanctions that will be reimposed on August 6.

The protests are growing and spreading, leaving many to speculate that Iran is on the verge of a revolution.

Oubai Shahbandar, a Syrian-American analyst and fellow at the New America Foundation’s International Security Program, said: “The very dire social conditions underlying the unrest that led to the Iranian revolution in 1979 seem to be very much in play today. The fact that much of these protests are taking place both in major towns and villages in the countryside is a major concern for the leadership in Tehran… The ensuing political and social instability will undoubtedly crescendo into an existential crisis for (Supreme Leader Ali) Khamenei’s rule if popular demands for reform are not met in earnest.”

These protests are no new occurrence, however. In fact, they are a part of the Iranian uprising that began in December.

Iranian affairs expert Majid Rafizadeh said: “The latest unrest broke out in the major cities of Isfahan, Karaj, Shiraz, Rasht and Tabriz, and are rapidly spreading across Iran. Many of the protesters initially took to the streets to express outrage over an ongoing crisis of unemployment and currency devaluation but the demonstrations quickly took on a political tone, with calls for the ouster of the Iranian government.”

He continued: “The protests that erupted the following day made it clear that the Iranian people place the blame for their economic hardships squarely on the mismanagement and corruption of the ruling Mullahs.”