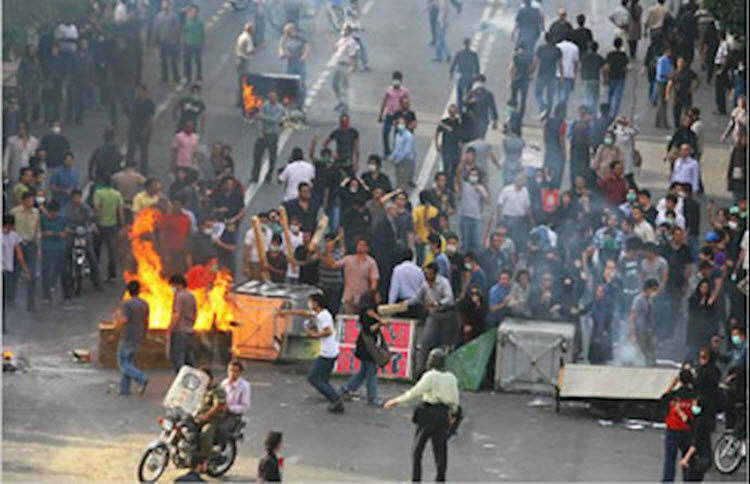 London, 6 August – On Sunday, the Iranian people had been protesting for six days straight against the Mullahs’ Government that has destroyed the Iranian economy.

The Iranian people have been telling the world for a long time that the Government’s corruption and mismanagement has caused many problems in their country, from a lack of jobs to high food prices to severe water shortages. They advise that the Government spends the people’s money on foreign adventurism across the Middle East (i.e. Syria, Lebanon, Yemen), while ignoring problems at home. This negligence has caused the people to take to the streets, despite the threats of violence from the Government’s security forces and the risk of imprisonment or execution.

A representative from the National Council of Resistance of Iran (NCRI) said that these protests are growing in size and scaled despite the violence used against them. He said that the Government has arrested many protesters and has used water cannons and tear gas against those in the streets.

Farhan Haq, a spokesman for United Nations Secretary-General António Guterres, said: “We once more emphasize, as we do with all such protests, that the rights … of their freedom of expression and peaceful assembly need to (be) respected by all including the security forces.”

A video of Sunday’s protest in Tehran that is trending on social media shows the people chanting “mullahs must get lost”, while another tweet quotes the protesters in Arak as shouting “No to Gaza, No to Lebanon. My life for Iran.”

Iran analyst Behnam Ben Taleblu, a research fellow at the Foundation for the Defense of Democracies (FDD), explained that these chants are significant as they show that the ordinary Iranians – even those who traditionally supported the Government – realise that the Government doesn’t have their best interests at heart.

Ben Taleblu said: “These protests present a larger problem for the Government’s leadership than previous movements. They represent those whom the Government relied upon in the past, such as day labourers, the urban and rural poor, and even select religious classes. In a sense, the Government’s social base is turning against it, indicative of the growing cleavage between state and society in Iran.”

These protests, part of an ongoing uprising in Iran, are encouraged by Maryam Rajavi head of the NCRI, who has called on all Iranians to rise up against the mullahs.

She said: “Iran’s risen and revolting cities are joining the protests, one after the other. The cry for freedom is becoming louder, and the uprising is expanding more and more every moment. There is no force more powerful than the united force of young people.”