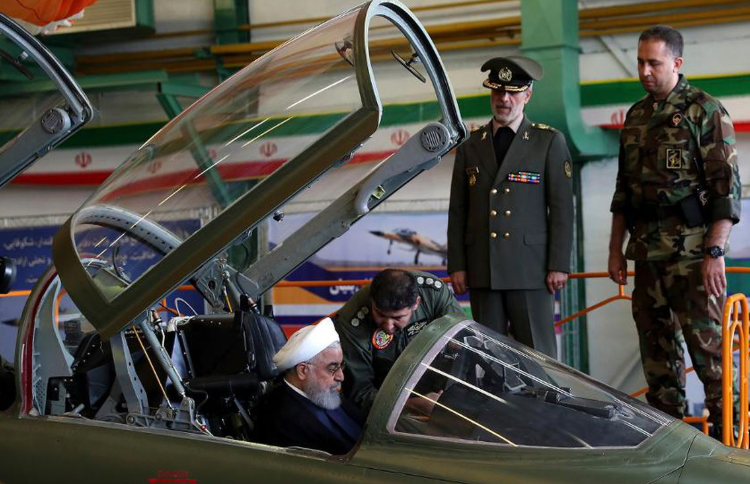 London, 24 August – On Tuesday, at a ceremony in Tehran to mark Defense Industry Day, the Islamic Republic of Iran Air Force (IRIAF) displayed what it claimed was its first domestically-designed and manufactured fighter jet.

While the unveiling garnered local media attention, observers have pointed out that the twin-seater Kowsar bears a striking resemblance to the F-5 designed by Northrop in the 1950s, which was used by US forces in the 1960s.

The event was attended by President Hassan Rouhani, defense minister Brigadier General Amir Hatami, and several other officials. Rouhani was photographed in the cockpit of the aircraft at the launch.

The Kowsar was describe by local Iranian news agencies as a “fourth-generation” fighter jet with advanced avionics, radar, and fire control systems that can be used for short aerial support missions. Although TV footage showed the plane taxiing along the ground, and published still images of it in the air, no videos showed it taking off, or in flight.

Doubts have been raised about its close resemblance to the US-made F-5 fighter, and Iran’s opponents wonder how effective it will prove to be in reality.

Justin Bronk, a research fellow for airpower and technology at the Royal United Services Institute said, “Yes, it’s a modernized F-5, first designed in the 1950s and in service since the 60s. One can get a lot out of modernizing older airframes but this is pushing it.”

Iranian officials have boasted on several recent occasions about their ability to overhaul the aging fighter jets in their fleet. They’ve spent thousands of man-hours on these fighter jets. But an overhaul is entirely different to producing a new model.

US arms manufacturers supplied Iran before the 1979 revolution. After that, Washington cut off supplies and Tehran has had to look elsewhere while it developed its domestic defense industry. In 1991, when Saddam Hussein sent his planes across the border to protect them from the US-led invasion, Iran gained a number of aircrafts as the planes were never returned.

Now, Iran’s air force fleet is growing old. According to the London-based think tank, The International Institute for Strategic Studies (IISS), the Iranian air force has around 300 fighter / attack aircraft but not all are airworthy. The IISS estimates the serviceability is around 80% for the Russian-built aircraft and just 60% for the US-made ones.

As well, the quality of Iran’s domestically-produced weapons has been questioned. A recent report by Jane’s Defence Industry and Markets Intelligence Centre said Iran that Iran had made “remarkable progress, given the Islamic Republic’s international isolation and limited defence-industrial base. Nevertheless, Iranian weapons often fall short, literally and metaphorically.”

The launch of the Qaher F-313 stealth plane remains the low point of Iranian weapons history. It was unveiled in 2013 when President Mahmoud Ahmadinejad was in office, and was quickly judged by international analysts to be simply a model. As Iran attempted to fool the world, it in fact, mocked itself.

Reuters: Iran said it would produce in a year...

Washington Post: In a 300-year-old former caravansary, representatives from...