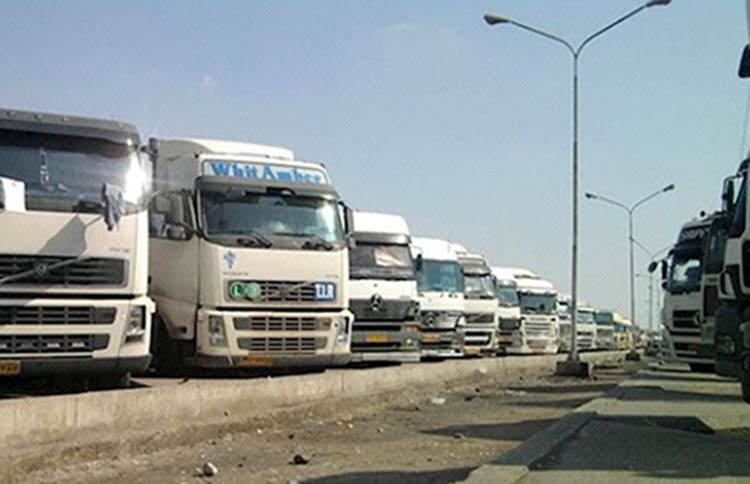 London, 28 Sep – Another nationwide strike by Iranian truck drivers has begun in protest of rising costs. A few months ago, a trucker’s strike drew international support and caused shortages at gas stations.

On Wednesday, video clips were posted online showing trucks idle in at least six regions: Ahvaz, Ardabil, Borujerd, Qazvin, Shahreza and Urmia. It has been verified that this is the fourth consecutive day of reports of the widespread strike by truckers in Iran.

The truckers are protesting low wages, which they see as unfair in light of the rapidly rising costs for parts and supplies.

Iran’s chaotic economy, including the recent depreciation of the Iranian rial versus the U.S. dollar, which reportedly hit a record low of 190,000 to the dollar in unofficial trade Wednesday, contributes to the rising prices of parts and supplies for truckers. It was the third straight day of record lows for the rial.

Iranian state news agency Mehr, in a report published Wednesday, quoted several truck drivers, who said that the price for a some tires should be about $450, based on the official Iranian exchange rate of 42,000 rials to the dollar. Instead, dealers have been charging as much as $1,300 for such tires, according to the truck drivers.

The strike on May 22nd, that crippled several parts of the country, was based on similar grievances — inflationary insurance prices, permit fees, high commission rates, spare parts costs, and increasing operational costs. That strike continued for several weeks, and gained statements of support from the London-based International Transport Workers’ Federation (ITF), who represents 19 million workers in 140 countries, as well as from the International Brotherhood of Teamsters, which represents American and Canadian transportation and supply chain workers.

Because gasoline tanker drivers participated in the strike, shortages at Iranian gas stations caused shut downs in some Iranian cities. Large lines are already forming at gasoline stations in Iran, with this new strike.

In Iran, truckers’ wages are determined by haulage fees set by the government. During the first strike in May-June, truck drivers demanded increases between 35 and 50%, while Tehran agreed to a 20% increase. The situation is worsened by the plummeting value of the rial.

During the past year, Iran has seen frequent nationwide protests, beginning at the end of last December and continuing through today. Iranians are angry over the mismanagement, corruption, and oppression by their government and business leaders.

Obama: Iran as threat but US should try diplomacy