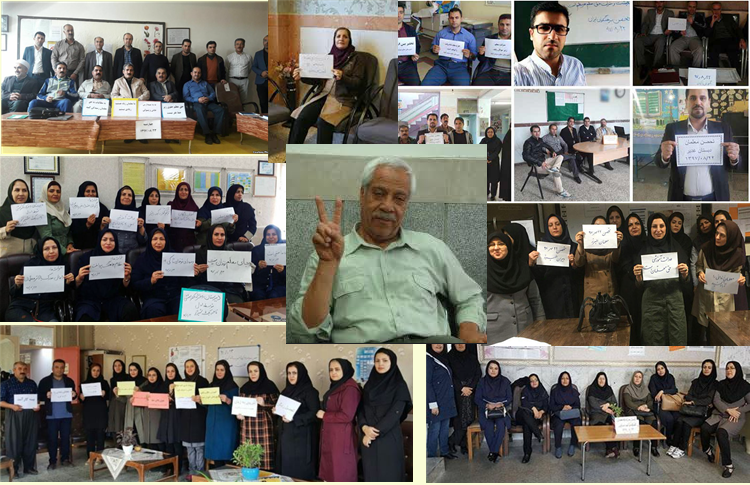 London, 18 Nov – As protests and demonstrations rage across Iran, involving people from all walks of life, according to a statement by Coordinating Council of Teachers Syndicates in Iran (CCTSI) on November 15th, teachers in the country have been arrested or summoned to courts. “At least thirty teachers’ rights activists have been summoned and interrogated and more than fifty others have received threatening text messages, so far,” CCTSI disclosed.

“At least twelve teachers have been detained since last Tuesday, the second day of a new round of sit-ins by teachers across the country to protest hardship, low-quality education, and privatization of the schools,” the statement continued. “The aim of the sit-ins is to force Iran’s rulers to respect their duties defined by the country’s constitution and provide free, fair, and high-quality education for all, as well as a respectable livelihood for the teachers,” said the statement by the Coordinating Council of Teachers Syndicates in Iran (CCTSI).

Students are reportedly joining their teachers in the strike. Local websites cite the students saying that they cannot afford the high tuition fees demanded by their schools.

Women have also been playing a vital role in organizing the sit-in protests, which have remained peaceful.

In Iran’s holy city of Mashhad, Hashem Khastar, a prominent teachers’ rights activist, was recently abducted by plainclothesmen. His family later learned that he was shackled to a bed at a psychiatric hospital. Khastar, a former teacher at the Agriculture Technical High School in Mashhad and an agricultural engineer, is the Head of the Mashhad Teachers Union. He has been repeatedly detained for defending teachers’ rights, previously, including a stay from 2009 to 2011 in Mashhad’s notorious prison, Vakilabad. He has also publicly criticized the Islamic Republic’s Supreme Leader Khamenei in online forums, calling him a “dictator” in commentary published by Iran Kargar. Khastar was released under national and international pressure. He pledged his gratitude to the striking teachers and criticized Iran in an open letter published on social media.

It read,” We don’t have guns. Our guns are our pens and our words and our gatherings and our sit-ins,” Khastar asserted. “The guns are in the hands of those who protect lawless, tyrannical, cruel rulers instead of defending the rule of law. They defend those who steal millions and arrest petty thieves and cut off their hands and legs.”

AP: The U.N. Security Council will not take up...