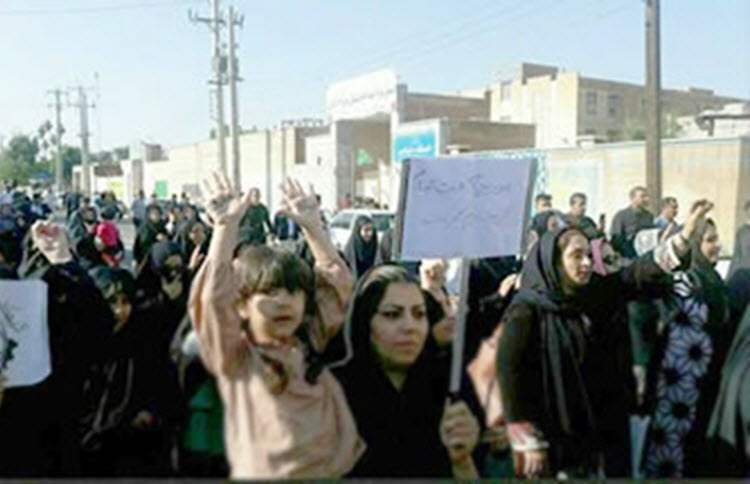 London, 19 Nov – Protests at the Haft Tappeh (Tapeh) sugar mill, once a source of national pride that has been struggling financially since it was privatized in 2015, continued as workers stayed with their strike on Saturday, according to reports by labor rights groups in Iran. Periodic strikes and workers’ demonstrations have become a fixture of life at the mill. Workers say they are often not paid their salaries for months at a time and their wages and benefits have been cut since privatization.

Families accompanied the workers as they marched in Shush, southwestern Iran, to draw attention to their demands, ending the march near the governor’s office.

Reports also say that some three busloads of security forces arrived in Khuzestan province, and anti-riot police were stationed in and around the complex on Saturday. In their social media posts, labor organizations worry that the arrival of anti-riot forces signal a plan to break the workers’ strike.

For nearly a year, the Haft Tappeh workers have staged intermittent strikes and protests. They are angry over the mismanagement of the privatized complex, late payment of wages, and lack of production by the factory. They demand an end to the private ownership. They desire a takeover by workers, or a combination of ownership in which they can have a voice in running the business. They say they haven’t been paid since August and are demanding answers about the future of the industrial complex.

The complex was once profitable before it was privatized in dubious circumstances. The Haft Tapeh Sugar Cane Mill is the only factory of its kind in Iran. It was built nearly half a century ago during the reign of last Shah of Iran, Mohammad Reza Pahlavi. The agro-industrial complex was always lucrative until the Islamic Republic decided to sell it to the private sector in a murky transaction in 2015.

The complex, built on a 2-hectare area, was sold to the private sector for a down payment of roughly two million dollars. It is not clear if any further payments have been made. In fact, its current owner seems to be on the run from the authorities for non-payment of loans from government banks.

New US Policy on Iran Targets IRGC and Hezbollah