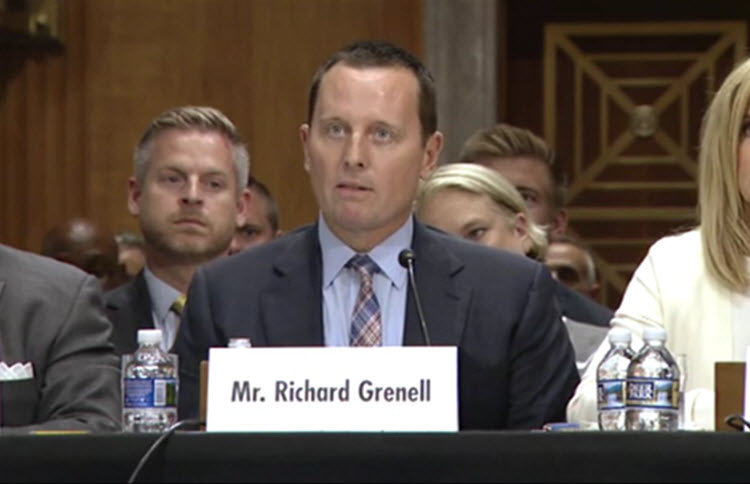 London, 30 Nov – According to US Ambassador to Germany Richard Grenell the US government will contemplate sanctions against French and German entities that seek to evade sanctions on Iran’s clerical dictatorship. Grenell said, “The US will consider sanctions on those entities participating in these tactics,” and added that the French and German activities “would not be a smart move.”

Grenell was responding to a Wall Street Journal article, that reported on Monday, “France and Germany have joined forces to rescue a European effort to create a payments channel to keep trade flowing with Iran, defying US attempts to take the air out of the plan.”

Foreign Ministry spokesman Emmanuel Nahshon answered questions about Germany, “We have an ongoing dialogue with Germany on Iran-related issues. We prefer to conduct it directly with the German authorities, and not through the media.”

German Chancellor Angela Merkel has declared Israel’s security interests to concerning, but during a pro-Israel conference in Frankfurt, Strategic Affairs Minister Gilad Erdan urged Merkel’s administration to counter Iran because it is an “exporter of terror. Germany should take a more aggressive stance against Iran…. It was only yesterday that President Rouhani called Israel ‘metastatic cancer.’ History has taught us that antisemitic threats from fanatical leaders, and exporters of terror who have hegemonic aspirations, must be taken seriously.” He implored Merkel to join US sanctions against Iran.

During her visit to Jerusalem in October, President Reuven Rivlin also urged Merkel to support American sanctions against the Islamic Republic.

An unnamed official of the German Foreign Ministry commented about an email written by Germany’s Social Democratic Foreign Minister Heiko Maas regarding the sanctions-evasion mechanism. He said, “Foreign Minister Maas has repeatedly expressed his clear attitude to the Shoah in his speeches.”

The Foreign Ministry declined to respond.

“The French and Europeans are acting in strict compliance with their international and European commitments and in accordance with their national laws. The commitments made within the framework of the Iran nuclear deal brokered in Vienna were endorsed by the UN Security Council in its resolution 2231 and therefore apply to all member states. The Europeans are continuing to implement their obligations in this regard,” wrote an official of France’s Foreign Ministry, and added, “The work currently being carried out on the Special Purpose Vehicle is aimed at establishing an economic sovereignty tool for the European Union beyond the Iranian case. It is therefore a long-term task that will protect European firms from the effect of unlawful extraterritorial sanctions in the future.”

The Foreign Ministry official concluded, “Regarding your last question, France always condemns in the strongest possible terms any initiative that fosters racism and antisemitism, wherever it may be.”

The WSJ article claims that, “The steps by Europe’s most powerful countries are part of their campaign to salvage the 2015 Iran nuclear deal after President Trump withdrew the US in May. Their goal is to help European companies continue some business activity with Iran despite sweeping new US sanctions on the country and any company that does business with it.”